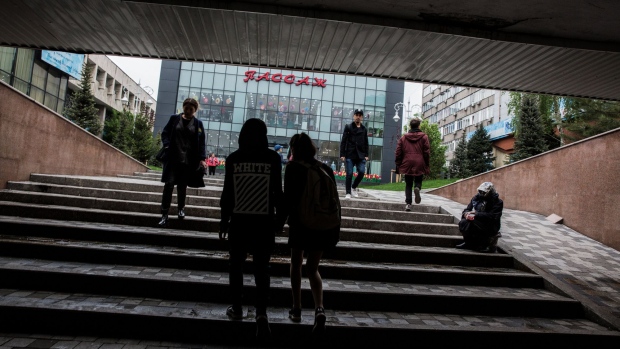 Pedestrians walk through an underpass in Almaty, Kazakhstan, on Thursday, April 26, 2018. By juggling its reserves to reduce the pain of negative interest rates in Europe and Japan last year, the central bank of Kazakhstan has set itself up to reap the benefits of a rallying dollar. Photographer: Taylor Weidman/Bloomberg , Bloomberg

The National Bank raised the key rate by 25 basis points to 9.75%, it said in a statement Monday.

“In the context of an increased external and internal inflationary background, the National Bank continues to normalize monetary policy in order to reach a corridor of 4-6% in 2022,” the central bank said, adding it would continue a deflationary monetary policy.

The move comes amid accelerating inflation in Kazakhstan, which reached 8.9% in September, tracking persistent price growth in Russia and internationally. On Friday, the Russian central bank surprised the market with a larger-than-expected rate hike.

Last week, the National Bank said increased demand for Russian goods was driving the tenge’s decline against the ruble and warned of “additional growth in consumer prices in Kazakhstan by importing accelerating inflation from” its largest trading partner.

Kazakhstan has boosted purchases of “socially significant food items” as part of the government’s anti-inflation plan that it introduced last month. Growth in fuel and grain prices could hurt efforts to stabilize inflation, Governor Yerbolat Dossayev told the cabinet on Oct. 12.

The central bank’s rates corridor, formed from the overnight deposit and lending rates, was kept at plus or minus 1 percentage point around the benchmark.

The next key rate decision is scheduled for Dec. 6, according to the statement.