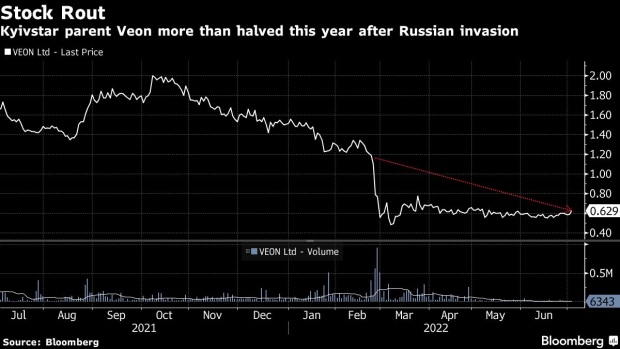 (Bloomberg) -- Employees killed and displaced, infrastructure seized by force and relentless cyberattacks are only a few of the challenges that Ukraine’s largest mobile phone operator is struggling to overcome as the country tries to fight off Russia’s invasion.

Alexander Komarov, the chief executive officer of Kyivstar, said about 10% of the company’s network can’t function because Russian officials have switched off base stations and captured hardware. But that’s only part of the problem.

Since Russian President Vladimir Putin launched his attack against Ukraine, Kyivstar has been subject to a “tremendous increase in DDos and an even bigger jump in phishing attacks,” Komarov said Monday in a video interview from Lugano, Switzerland, where he’s attending a conference on rebuilding Ukraine.

The company’s staff has also suffered fatalities, with one employee killed in the Kyiv suburb of Bucha, where Ukraine has accused Russian forces of committing war crimes. Another of Kyivstar’s 3,700 employees has been missing since May and a third has been detained by the Russian forces, he said. More than 100 were drafted into the army.

“Around 10% of our employees right now are in a dangerous proximity to the combat line, but they are doing essential jobs there,” Komarov said.

Kyivstar has halted operations in Russian-occupied territory and converted offices into shelters, where roughly a quarter of its workforce have temporarily moved for safety.

Komarov said it’s difficult to quantify the damage the company has suffered because it doesn’t have access to territory not held by Kyiv’s forces. But he estimated losses of billions of hryvnia, citing “ruined offices, sales centers, base stations.”

One upside of the war has been solidarity between Ukraine’s mobile operators, according to Komarov, who said competition in the industry has “almost evaporated” as former rivals have joined forces to help provide service continuity.

Kyivstar is a subsidiary of Veon Ltd., which was founded in Moscow in 1992 as VimpelCom, one of Russia’s first cellular-phone providers. Today Veon is a Dutch-domiciled telecommunications giant serving over 217 million customers in nine countries.

It’s still the third-largest mobile-phone provider in Russia with its Beeline brand, which Kyivstar has no contact, Komarov said.

“We’re decentralized, it’s an independent operation,” he said, adding that the Kremlin has sanctioned two of the Ukrainian operator’s board members.

At the same time, LetterOne Investment Holdings, founded by Russian billionaire Mikhail Fridman, owns 47.9% of Veon. Fridman, who’s under sanctions from both the European Union and the UK, stepped down from the boards of Veon and LetterOne after the war began.

But Ukraine’s bid to join the EU could complicate future ties with Huawei, because the EU’s Investment Screening Mechanism curtails non-EU investment into strategic sectors.

When asked whether Kyivstar and the Ukrainian government are equipped to manage tensions stemming from the Chinese presence, Komarov said it would be taken into account and that he was “absolutely sure that Ukraine’s future is very much related to our ability to move toward the European Union.”

He also refused to give details of Kyivstar’s financial position because of the cloud of uncertainty created by the war.

“From my perspective, we will not upstream any dividends from Ukraine for a while,” he said. “All the resources should stay in the country.”