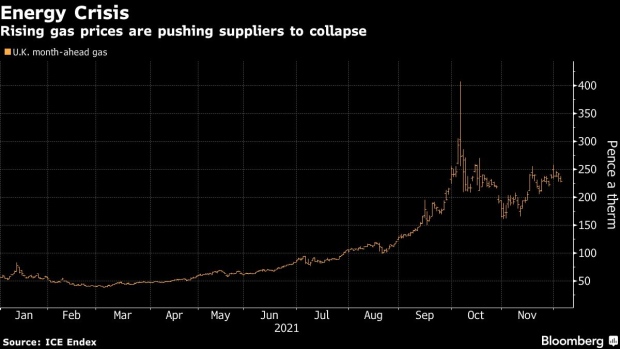 Traffic on the A130 dual carriageway against a backdrop of an electricity substation in Rayleigh, U.K., on Tuesday, Sept. 21, 2021. U.K. Business Secretary Kwasi Kwarteng warned the next few days will be challenging as the energy crisis deepens, and meat producers struggle with a crunch in carbon dioxide supplies. Photographer: Chris Ratcliffe/Bloomberg , Bloomberg

(Bloomberg) -- The cost of fine-tuning supply and demand in Britain’s power market surged to a record in the three months to November, contributing to two dozen suppliers going out of business.

National Grid Plc spent 967 million pounds ($1.3 billion) in the balancing market for the period, compared with 337 million pounds a year earlier, according to LCP Energy Analytics. Ten of the most expensive days on record were during this time.

The sharp rise in the costs is shared out among generators and suppliers and ultimately charged to consumers. It adds near-term pressure on companies already contending with soaring wholesale prices.

“The energy crisis has torn apart the sector,” said Rajiv Gogna, partner at LCP. “Suppliers have had to tackle this huge cost increase from their already stretched balance sheets.”

Power generators are paid to switch on plants when supplies are stretched, or turn them down when it is windy and they’re not needed. Companies like Electricite de France SA, SSE Plc and Drax Plc have benefited from record prices recently to help plug gaps left when wind generation dropped.

The total cost for all actions taken to balance the system, including other tools, soared to 1.25 billion pounds for the three-month period. LCP estimates the balancing charges for November alone will reach around 600 million pounds.

National Grid announced last week a review into how it pays to balance the market. The grid operator tries to choose the cheapest option where possible, but that level has been rising.

U.K. Power Balancing Under Review as Stations Paid a Bounty

“In recent weeks there have been some very high-cost days in the balancing mechanism,” National Grid said in a statement. “As those costs are ultimately borne by consumers it is important to fully understand the factors driving the market.”

There are likely to be more energy suppliers struggling to cover costs incurred from this autumn and winter for many months, Gogna said.