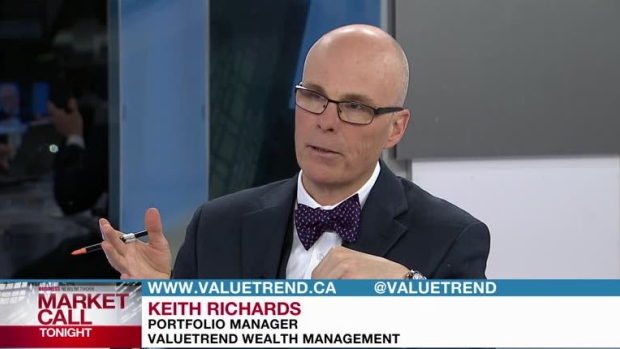 MARKET OUTLOOK
There’s a pretty good chance of the market continuing to be choppy or weak over the next few weeks. Sentimentrader.com posted a few statistics that might support this prognosis:

So, there are some points against the markets right now, at least in the near term. I raised 18 per cent cash in our equity model about a week ago in light of this potential. Given the above, it is my intention to begin redeploying my cash as opportunities present themselves in the coming weeks. Should near-term support of 2260 on the S&P 500 fail, you might find 2180 as the next reasonable target down. I am keeping an eye on these targets for potential entry points. Note that we remain in a longer-term bull pattern, as seen by the 200-day moving average and the higher highs and lows in the weekly chart patterns.

GENERAL ELECTRIC (GE.N)
GE has been consolidating between $28-$33 lately. We picked it up around $28 in the summer. It’s getting close enough to that $28-$29 point to be worthy of entry for new buyers. The stock is in a longer-term bullish trend, and pays a three per cent dividend. They reported Q4/16 earnings at the end of January. They disappointed on the industrial segment, but other segments demonstrated solid performance. This is a massive ship that has changed direction. Going forward, we believe shareholders will be rewarded.

BCE (BCE.TO)
We hold this stock in both our equity platform and income platform. In the equity platform, we sold it in the summer at $62 and re-entered at $59. It’s a bit below our re-entry price, but the trend remains intact. For patient investors wanting a high-dividend-paying stable stock, it’s suitable for both income and long-term growth. Their recent report showed that profitability was a bit light versus estimates, and guidance was to the conservative side. It seems tax expense and regulatory circumstances are being blamed for weakness. Wireless continues to see solid growth. Management is quite bullish on FibeTV for 2017. BCE will maintain the leadership role in Canadian telco as it continues to fight competition. Higher rate environment may prove to be less of a drag than is being priced into this stock. The current price probably represents a good entry point.

CASH
While I normally like to be fully invested for the “best 6 months” (November to May), we raised about 18 per cent cash in the equity platform last week in light of some greater-than-normal potential risk surrounding the recent stock price patterns and election cycle. However, we expect to re-deploy this cash in the coming weeks if/as/when markets show weakness. Readers should not view this cash allocation as a sign of bearishness – it’s more opportunistic!

RIO TINTO (RIO.N)
Rio continues to look bullish after its base breakout late last year. Copper, and other metals that it produces, can be strong into the spring. We still own our position. China will continue to dictate the movement of this stock. Expectations of stronger growth from China drives commodities higher, and hence the share price of RIO. The company will report on Feb. 8.

CP RAIL (CP.TO)
We sold this last week at $202 as part of our efforts to raise cash. That level represents a technical resistance point. We may re-enter this stock in the future, as it still has a longer-term positive profile.

JOHNSON CONTROLS (JCI.N)
The stock has a choppy but positive pattern, and the automotive sector (which has an influence on this company) tends to be seasonally strong until the spring. Revenue on the quarter was a bit light, and the stock has paused. The merger of two cultures (Tyco and Johnson Controls) is off to a good start. Profitability looks better and the company is confident in its full-year growth expectations.