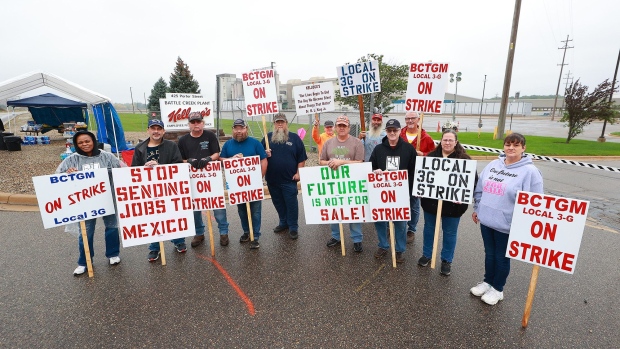 (Bloomberg) -- Members of the Building and Construction Trades Council union will return to work Tuesday at the Kellogg Co. cereal factory in Omaha, Nebraska, while the broader strike against the company continues.

An estimated 100 ironworkers, carpenters, electricians and other skilled tradespeople will go back to the plant to avoid defaulting on their contracts, Dan Osborn, president of the Omaha local of the Bakery, Confectionery, Tobacco Workers and Grain Millers International Union, said Monday. The arrival of third-party contractors has endangered their jobs, Osborn said. “They’ll lose their contracts.”

“I, and our membership, at this time, feel it is in the best interest that they return to work to fulfill their contracts,” Osborn said in an emailed statement. Kellogg and the Trades Council didn’t immediately respond to requests for comment.

Kellogg shares were about unchanged in New York trading Monday. The stock is down less than 1% for the year and more than 4% since the strike began.