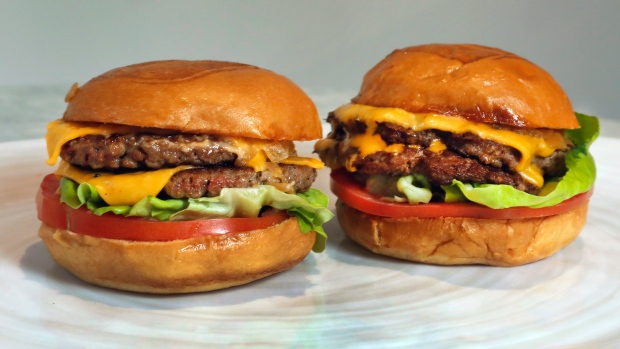 An Original Impossible Burger, left, and a Cali Burger, from Umami Burger, are shown in this photo in New York, Friday, May 3, 2019. , AP Photo/Richard Drew

Watch out Impossible: Kellogg Co. is planning its own plant-based imitation meat.

Early next year, Kellogg’s Morningstar Farms will begin selling the “Incogmeato” burger: a plant-based, refrigerated patty made with non-GMO soy that is designed to mimic meat’s look and flavor. It will also start offering new versions of its vegetarian “Chik’n tenders” and “Chik’n nuggets” that the company bills as an improvement over its current chicken-substitute products.

Kellogg Chief Executive Steve Cahillane said the burgers will “sear wonderfully” and “bleed on the grill” -- qualities that have helped vault patties from Impossible Foods Inc. and Beyond Meat Inc. into the consumer spotlight. The company plans to place its plant-based burger in the meat case in grocery stores alongside real meat.

Kellogg has for years offered frozen veggie burgers, but patties made with ingredients like black beans and mushrooms were never intended to taste like meat, and its more meat-like Grillers look outdated compared to the newcomers. It’s now playing catch up as Impossible Foods and Beyond Meat latch on to “flexitarian” consumers that are reducing their beef consumption by eating meat-like replacements.

The demand for meat substitutes has boomed as consumers see the products as healthier and more environmentally friendly than beef, with Barclays predicting the global market will reach US$140 billion globally in the next 10 years.

Kellogg is still the number one seller of veggie burgers, according to data from Euromonitor, but its market share has slipped significantly, from 33.3 per cent in 2013 to 16.9 per cent in 2018, even as its sales have rebounded in the last few years.

“We think of ourselves as the original plant-based food company,” Cahillane said, while acknowledging the company has lost market share.

Kellogg is seeking to offset declines in cereal sales with gains in snacks and frozen foods. Its shares have gained about 12 per cent this year through Tuesday’s close, below the advance of the S&P 500 Index.

“We got back on our game the last couple of years,” Cahillane said. “Our goal over the long term would be to maintain leadership and ultimately gain share.”