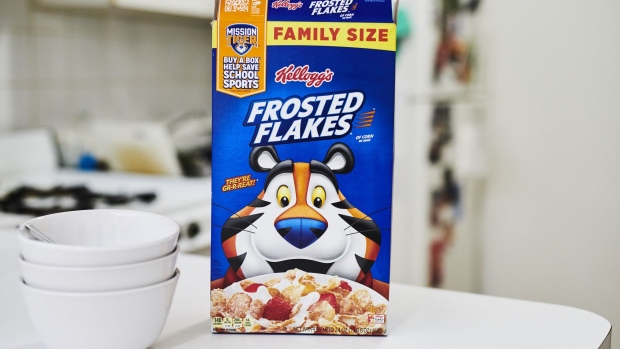 Kellogg Co. has struggled to keep Frosted Flakes cereal on store shelves in recent months, recalling the production snags that plagued manufacturers earlier in the pandemic and left some pantry staples hard to find.

The packaged-food maker has also been unable to meet demand for its Morningstar Farms meat alternatives and Corn Flakes cereal, the company said Thursday as it reported quarterly results. The supply challenges for some of Kellogg’s marquee brands come as many retailers say the pandemic-driven pantry-loading trend is beginning to wane.

Kellogg acknowledged that it was caught flat-footed by soaring demand for certain foods in 2020 after several “flattish to down” years for cereal. The Morningstar Farms challenges take the shine off an otherwise banner year as sales of meat alternatives took off.

“We weren’t planning on growing 25 per cent as we entered the year,” Chief Executive Officer Steve Cahillane said in an interview. The demand surge driven by the pandemic, he said, was “unknowable.”

While Morningstar Farms had been the leader in the meat substitutes category at retail for years, and its sales were increasing, its market share was still slipping. In 2020, it was knocked from the top spot by Beyond Meat, data from Euromonitor shows.

But other companies in the booming meat alternatives space were better prepared, having ramped up production before and during the pandemic.

Conagra has announced investments to increase Gardein’s manufacturing capacity, including a US$16.1 million expansion of a Maryland plant. Impossible Foods, which had its own shortages in the past, has said it increased production sixfold in its Oakland plant and added additional capacity at other plants with its co-manufacturing partners.

On the cereal front, Kellogg had to curb promotions of Frosted Flakes due to capacity constraints, leading to a decline in market share last quarter, Cahillane said during a conference call. Promotions could be crucial to the success of the cereal empire as consumers are likely to be influenced by cereal ads, according to Jennifer Bartashus, senior analyst at Bloomberg Intelligence.

Kellogg’s brands aren’t the only ones that have been harder to find during the pandemic. Following a shortage of Grape-Nuts cereals, Post Holdings Inc. said Thursday that the product will be shipping at full capacity by mid-March.