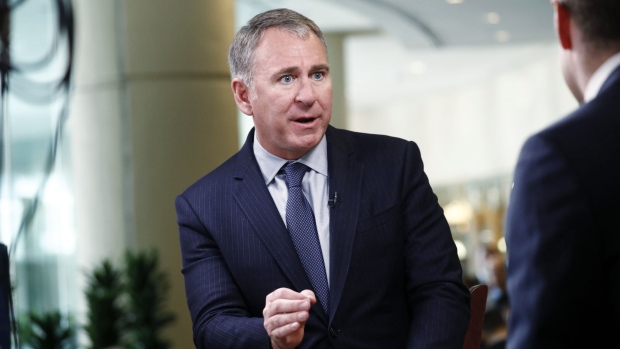 Kenneth Griffin, founder and chief executive officer of Citadel LLC, speaks during a Bloomberg Television interview at the Milken Institute Global Conference in Beverly Hills, California, U.S., on Tuesday, April 30, 2019. The conference brings together leaders in business, government, technology, philanthropy, academia, and the media to discuss actionable and collaborative solutions to some of the most important questions of our time. , Bloomberg

Citadel Securities, whose founder Ken Griffin testified about the episode during a February congressional hearing, fired off a series of tweets late Monday denying allegations that it pressured Robinhood to restrict trading. Robinhood, led by Chief Executive Officer Vlad Tenev, said in an emailed statement Tuesday that the lawsuit paints “a false narrative of collusion” with Citadel Securities.

Griffin added a statement of his own on Tuesday: “It must frustrate the conspiracy theorists to no end that Vlad and I have never texted, called or met each other. But I must say, kudos to Vlad and his team at Robinhood for their remarkable success story.”

Plaintiffs in the lawsuit allege that Citadel Securities amassed a substantial short position in GameStop Corp. and other stocks that exploded in value, and that the market-maker pressured Robinhood to stop customers from purchasing those shares, which the online brokerage did on Jan. 28.

Senior executives at both Citadel Securities and Robinhood had “numerous communications with each other that indicate that Citadel applied pressure on Robinhood,” according to the complaint filed Sept. 22 in federal court in Miami.

Both firms have pushed back against the notion that Citadel Securities directed the brokerage to restrict purchases. Robinhood has said it faced a large demand for collateral from a central clearinghouse and scrambled to raise more than $3 billion of additional capital in the following days.

“We will work vigorously to continue correcting the record with the facts,” Robinhood said in its statement Tuesday. The firm’s securities unit “was communicating with market-makers in an effort to ensure continued market access for our customers.”

Citadel Securities also tweeted a rebuttal to an accusation that Griffin lied to lawmakers: “When asked whether Citadel Securities requested that Robinhood restrict trading, Ken Griffin truthfully told Congress, ‘Let me be perfectly clear. Absolutely not.’”

The saga has drawn attention to the complex machinery behind the execution of trades. Robinhood sends customer orders to Citadel Securities and other trading firms to be carried out, and accepts remuneration from those firms in what’s called payment for order flow.

While other retail brokerages such as Charles Schwab Corp. also use such arrangements, it’s particularly important to Robinhood, comprising about three-quarters of its revenue last year and 80% in the first half of 2021, filings show.

Payment for order flow, which critics have said poses potential conflicts of interest, faces fresh scrutiny from Securities and Exchange Commission Chair Gary Gensler, who has said that a ban is possible. Last week, Scion Asset Management’s Michael Burry said he received a subpoena from the SEC as a part of an investigation into the meme-stock madness.

Separately, Tenev defended his firm’s business model in a Wall Street Journal op-ed Tuesday. Payment for order flow, he wrote, allows the company to offer commission-free trades with no account minimums, “which has helped a new generation of retail investors get started.”

Banning the practice, he said, “is unlikely to help retail investors get better prices and would likely re-erect barriers that kept so many out of the market.”

Addressing criticisms that Robinhood lures inexperienced investors with game-like tactics to keep them trading more, he wrote: “Investing isn’t a game, but must it be grim and difficult to understand?”