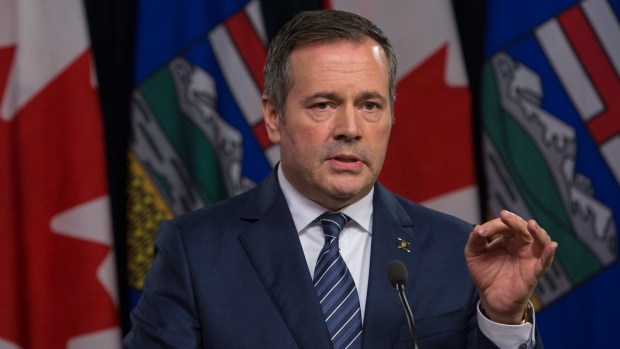 "Just watch me," Kenney said in Calgary on Monday, echoing the comment by Trudeau in 1970 when asked how far he would curtail civil liberties to deal with radical Quebec separatists during the October Crisis.

Kenney said tough choices need to be made to get Alberta's multibillion-dollar budget deficits back into balance in four years and prevent punishing future debt interest payments.

His United Conservatives ran on balancing the budget in their first term and, on Monday, Kenney effectively staked his party's reputation on it.

"We will be judged by this," he said.

"Barring some global financial catastrophe, if we do not balance the budget by the time of the next election I would expect many Albertans to hold us to account."

Kenney said the fiscal plan isn't meant to reduce health or education budgets, but to find savings within those departments.

"There will be some what we call re-profiling from low priority or wasteful spending in those areas to high priority front-line services."

The government would also look at not filling jobs as they come open, he said.

"We want to minimize any potential layoffs by maximizing attrition," he said. "When people take their retirement, in some cases in the core public service, they will not be replaced."

The government also will be "challenging" municipalities, school boards and hospital administrators to reduce spending, he said.

The budget is to come three days after the federal election.

Kenney dismissed a question on whether federal Conservative Leader Andrew Scheer asked him to present the budget after the election, on the assumption that any controversial spending cuts by Alberta conservatives could rebound on their federal counterparts.

"I think (Scheer) has more things to worry about than the dates of provincial budgets," said Kenney.

The premier said the budget is taking time to prepare because it will be "the foundation of a four-year fiscal plan to eliminate the largest per-capita deficit in Canada."

"You don't make up a $50-billion budget on the back of a cocktail napkin."

Kenney suggested the former NDP government had an easy job with the books because it simply increased spending and taxes, which led to multibillion-dollar budgets and growing debt.

NDP finance critic Shannon Phillips said the budget date is indeed deliberately set for after the federal vote to prevent any political blowback on Scheer as he takes on the Liberals and their leader Justin Trudeau.

She said Kenney's plan is causing anxiety for those either paid by or who rely on the public sector, and he is not being upfront about the serious cuts he needs to make.

"They are going to have to affect services. There is no magic here," said Phillips.

Kenney has said the budget will take its cues from a recently released report on Alberta's economy, which urged a fundamental rethink of government spending -- particularly in health, education, advanced education,and capital spending -- to arrest growing spending and debt.

The report said Alberta is a high public spender with average to below-average results, and that saving money through reorganized service delivery is the answer -- not raising taxes.

Among its recommendations are job attrition, farming out services to the private sector and across-the-board public-sector salary restraint.

Supporting documents for the report, compiled by KPMG, said there are close to 27,000 permanent employees within the government's core departments. Of those, 3,600 could retire now with full pension and another 2,500 will be eligible over the next four years.

In Alberta Health Services, the arm's-length administrative and service delivery arm of Alberta Health, an additional 5,000 staffers will be eligible for retirement over the next four years.