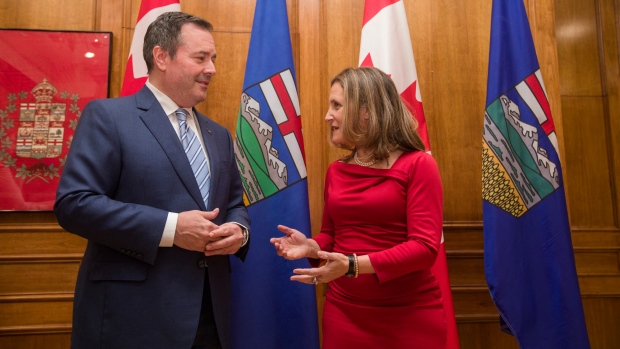 EDMONTON -- Alberta Premier Jason Kenney and Deputy Prime Minister Chrystia Freeland met up in Edmonton to try to find some common ground in a region that shut out the Liberals in the federal election.

She is also to meet Tuesday with Saskatchewan Premier Scott Moe.

Voters in Alberta and Saskatchewan did not elect any Liberals in the October election, and have been at odds with Trudeau's government on energy and environmental issues.

Kenney campaigned for federal Conservative Leader Andrew Scheer but, prior to his meeting with Freeland, said it's time to work with Ottawa.

"As the prime minister noted on election night, he wants to be there for Alberta and Saskatchewan, recognizing there are some real tensions in the federation, some deep challenges in our economy, and Albertans are looking for a fair deal," Kenney said Monday.

Freeland responded, "I am here to look for common ground. The premier is right that there are challenges in the relationship. Certainly our government heard from Alberta a strong message in the election."

Neither took questions from reporters. After the meeting, Kenney issued a statement saying he had urged Freeland to take action on the Canadian National Railway Co. strike that has disrupted businesses across the country and led to layoffs in some industries.

"I explained to her that every day the CN rail strike continues, (it) hurts Albertans and kills jobs and profits of businesses across Canada, and I repeated our government's call for her government to recall Parliament and legislate an end to the strike," said Kenney's statement.

Kenney also said he wants a firm guarantee on completion of the Trans Mountain pipeline expansion by a fixed date. The line would take more Alberta oil to the west coast and from there to markets abroad.

The line has been held up by court applications and political wrangling to the point that the federal government bought the project to ensure it gets completed.

Kenney has been exploring ways for Alberta to take more control of its destiny within Canada.

He has struck a panel to look at initiatives that include having Alberta withdraw from the Canada Pension Plan and create its own police force and revenue collection agency.