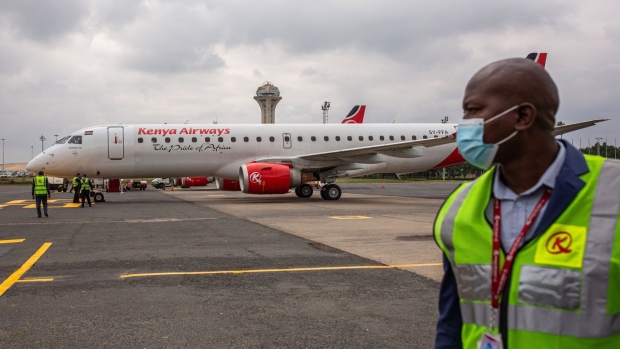 A member of ground crew for Kenya Airways Ltd. wears a protective face mask as he stands in front of an Embraer SA 190 passenger aircraft, operated by Kenya Airways Ltd., on the tarmac during a reopening ceremony at Jomo Kenyatta International Airport in Nairobi, Kenya, on Wednesday, July 15, 2020. Kenya Airways Plc started a three-month round of job cuts as lawmakers debate a bill to nationalize the carrier and its losses mount due to the impact of the coronavirus pandemic. , Bloomberg

(Bloomberg) -- Kenya’s government has scrapped a plan to fully nationalize the partly state-owned airline and is looking at other ways to safeguard money it has loaned the carrier, according to the International Monetary Fund.

It will cost a projected $1 billion to restructure Kenya Airways Plc and an injection of the funds by the state will be “unavoidable” as the East African nation’s Treasury has already guaranteed $750 million of debt owed by the carrier, the IMF said.

“The authorities do not intend to nationalize the carrier and are considering appropriate mechanisms to protect the exchequer’s financial interests during the restructuring process,” the Washington-based leader said in a statement issued after its second review of the nation’s extended-credit facility.

KQ, as the airline is known, needs a radical overhaul of its business model to minimize the burden it places on the state given challenges threatening the aviation industry in the post-pandemic environment, the IMF said. Changes required include cutting back on its operations and staff, enhancing efficiency and renegotiating leases and suppliers’ contracts, it said.