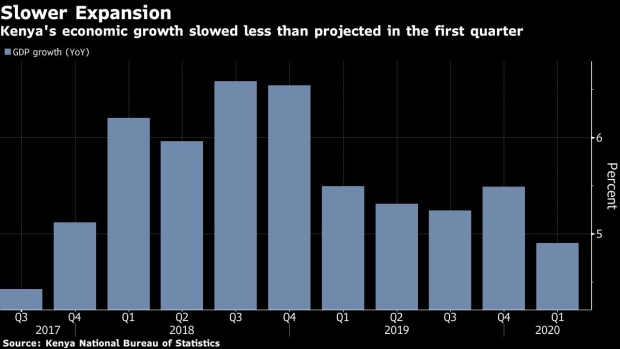 (Bloomberg) -- Kenya’s economic growth slowed to an almost three-year low in the first quarter as the coronavirus pandemic took a toll.

Gross domestic product expanded by 4.9% in the three months through March from a year earlier, compared with 5.5% in the previous quarter, the Kenya National Bureau of Statistics said Tuesday. The median of six economists’ estimates in a Bloomberg survey was 4.3%. The economy grew 1.1% quarter-on-quarter.

Output was affected by the uncertainty that was already slowing economic activity in some of the country’s major trading partners as a result of the virus, the statistics office said. Although Kenya only confirmed its first infection in mid-March, its horticulture and tourism industries were hit by shutdowns in key markets and global travel restrictions.

Cut-flower exports fell 13% from a year earlier to 42,639 metric tons because markets such as European Union and U.K. were under lockdown. The accommodation and food services sector contracted for the first time in nearly five years, shrinking 9.3% compared with growth of 9% the previous quarter due to virus containment measures that included banning of flights and closing recreational facilities. International visitor arrivals fell 19%.

Agriculture, forestry and fisheries, which make up about a third of the economy, grew by 4.9%. That was helped by tea production, which increased 49% to 158.6 million kilograms in the quarter compared with a year earlier, thanks to favorable weather. Kenya is the world’s biggest exporter of the black variety.

Expansion in sub-Saharan Africa’s third-largest economy could slow further due to the impact of global restrictions to curb the pandemic. The International Monetary Fund now sees Kenyan GDP shrinking by 0.3% this year, the first contraction in 27 years, compared with an April forecast of 1% growth.

(Adds quarter-on-quarter growth in second paragraph, and details on agriculture and accommodation sectors in fourth and fifth paragraphs.)