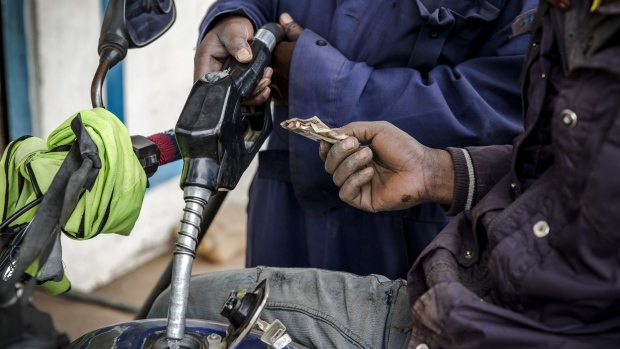 An attendant refuels a motorcycle taxi, known locally as a 'boda boda', as a customer hands Kenyan shilling banknotes over for payment at the Euro Petroleum petrol station in the Baba Dogo suburb of Nairobi, Kenya. , Bloomberg

(Bloomberg) -- Kenya’s May inflation is likely to soar further after gasoline prices jumped to a record high in the latest monthly review on Saturday, despite the use of a fuel subsidy.

A liter of gasoline will retail at 150.12 shillings ($1.29) in the capital, Nairobi, while diesel prices increased 4.4% to 131 shillings per liter effective May 15, the Energy and Petroleum Regulatory Authority said in an emailed statement. Kerosene jumped by 5.50 shillings to 118.94 shillings a liter.

“The government will utilize the petroleum development levy to cushion consumers from the otherwise high prices,” the agency said.

That’s the highest fuel has touched since Kenya began setting the price of gasoline, diesel and kerosene in December 2010.

Rising fuel prices have been a leading contributor to price growth in East Africa’s biggest economy in the past year, but its effect on inflation had been contained by a stabilization fund that has seen consumers pay artificially low prices.

Kenya’s inflation rate reached a six-month high in April of 6.5% on rising food and fuel prices.

Without the cushion, gasoline would retail at 176.47 shillings per liter from May 15, while diesel would be 174.94 shillings in the capital, according to the regulator.

In the 13 months to April, Kenya pumped about 49.2 billion shillings into subsidies to offset the impact of the war in Ukraine, the energy ministry said in a report tabled in National Assembly last month.

Kenyan consumers pay 5.40 shillings per liter of gasoline and diesel toward the stabilization fund, which has been used to tame prices and keep inflation within the central bank’s targeted range of 2.5% to 7.5%.

Global oil prices continue to rally as a squeeze on refined products push prices higher. Diesel exports from Russia fell sharply in April from their prewar level as some buyers seek to punish one of the world’s biggest suppliers.