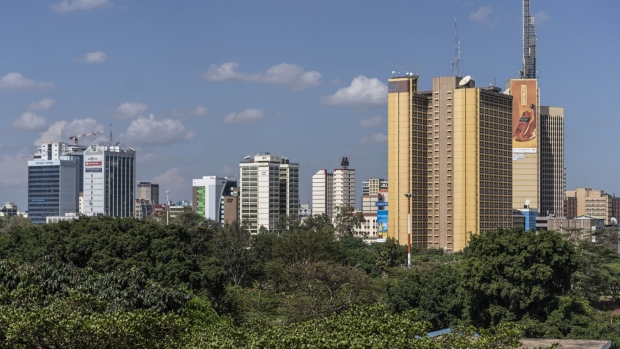 Commercial high-rise office buildings in Nairobi, Kenya, on Saturday, Dec. 5, 2020. Kenya is seeking a loan of as much as $2.3 billion from the International Monetary Fund under the lender’s extended fund facility. Photographer: Fredrik Lerneryd/Bloomberg , Bloomberg

The East African nation’s annual inflation rate rose to 5.8%, compared with 6.45% in October, Nairobi-based Kenya National Bureau of Statistics said Tuesday in an emailed statement. The median of five economists’ estimates in a Bloomberg survey was 6%. Prices rose 0.45% in the month.

The food and non-alcoholic drinks index, which comprises a third of the inflation basket, rose 9.92% from a year ago, compared with a 10.6% increase in October. The cost of items, including sugar and cooking oil, drove up the food index. The transport index rose 8.14%, almost similar to last month, as gasoline and diesel prices remained steady.