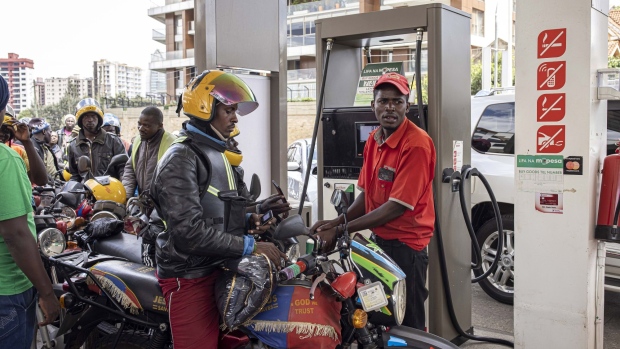 An attendant refuels a motorcycle taxi, also known as a 'boda boda', on the forecourt of a gas station in Nairobi, Kenya, on Wednesday, April 13, 2022. Kenya agreed to compensate oil marketers for selling fuel they imported at rates higher than what’s reflected in the retail cap, a bid to end a supply shortage in the country. , Bloomberg

(Bloomberg) -- Kenya left the cost of fuel unchanged for a second consecutive month for the period beginning Aug. 15, according to the Energy & Petroleum Regulatory Authority.

The retail price of gasoline will remain at 159.12 shillings ($1.33) per liter in the capital, Nairobi, EPRA said in a statement on Sunday. The price of diesel stays at 140 shillings, and that of kerosene at 127.94 shillings, according to the statement.

The rates are effective until Sept. 14.

EPRA announced its price review as the nation waits for results from the Aug. 9 presidential contest after a campaign period, during which the cost of living, driven by increasing energy and food prices, was an election issue. Available data shows an extremely close race between Deputy President William Ruto and former Prime Minister Raila Odinga.