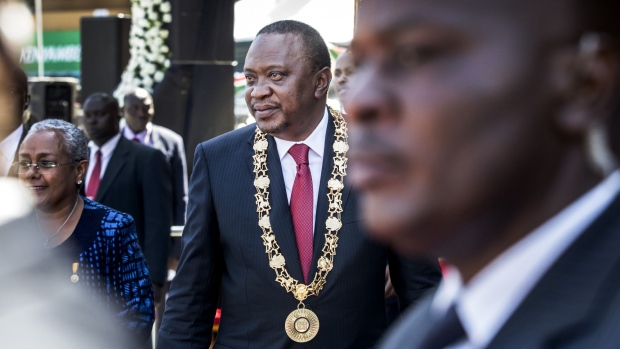 Uhuru Kenyatta, Kenya's president, attends the independence celebrations on Jamhuri Day at Kasarani stadium in Nairobi, Kenya, on Tuesday, Dec. 12, 2017. Kenya’s main opposition alliance postponed indefinitely plans to swear-in its leader as president of a so-called People’s Assembly, after the government warned such a step would amount to treason. Photographer: Luis Tato/Bloomberg , Bloomberg

to end ethnic animosity may end up widening fault lines that have triggered sporadic violence in the East African nation.

The two men commissioned a study on how to promote reconciliation in the wake of a disputed election in 2017 that threatened to reignite a conflict in which more than 1,100 people died a decade earlier. Their so-called Building Bridges Initiative envisions an end to a winner-take-all electoral system, watering down the executive’s powers and an enhanced role for parliament, according to a draft seen by Bloomberg. The document was verified by people with knowledge of the report, who asked not to be identified because the information is still private and could be amended.

While most politicians initially welcomed the rapprochement between the one-time foes and their attempts at nation-building, it’s caused ructions in the ruling Jubilee Party because it could pave the way for Odinga to become president in 2022 and leave Kenyatta’s deputy, William Ruto, out in the cold.

“Ruto is deeply suspicious of BBI because he sees it as a vehicle to create a coalition that excludes him,” said Nic Cheeseman, a professor of democracy at the University of Birmingham in the U.K. “The threat is that this then raises the political temperatures, and each side starts to prepare for the worst.”

Kenyan politics have long been a minefield, with largely ethnic-based coalitions determining who wields power. The five biggest groups are Kenyatta’s Kikuyu, Ruto’s Kalenjin, Odinga’s Luo, the Luhya and the Kamba, and whoever secures backing from at least three of them is almost assured of winning the presidency.

Allegiances are consistently shifting. Ethnic violence, mainly between Kenyatta and Ruto supporters, flared up after a disputed 2007 vote and both men were indicted by the International Criminal Court for their alleged roles in the bloodshed until the cases were thrown out for lack of evidence.

The two then joined forces to win elections in 2013 and 2017. While Ruto backed Kenyatta for the presidency on the understanding that he’d be next in line for the job in 2022, their relationship has soured since Odinga entered the fray.

“The intention from the word go is to give Raila a safe route to power,” said Herman Manyora, a political analyst and lecturer at the University of Nairobi. “For as long as it destroys Ruto’s presidential dream, he won’t support it.”

Odinga, 74, who leads the Orange Democratic Movement and has unsuccessfully run for office four times, has also had a fractious relationship with Kenyatta and accused him of stealing the last two elections. They reconciled in March 2018, but the terms of the deal they reached were never publicly revealed.

Odinga last year said he’d continue to push for a raft of reforms including the reintroduction of the role of a prime minister -- a post he held under a power-sharing accord that helped halt the 2007-8 violence.

A final version of the Building Bridges Initiative report will be presented to Kenyatta and Odinga this week, according to Martin Kimani, the secretary of a panel that’s drafting the plan. He described its contents as “monumental,” but declined to reveal details.

Besides proposing changes to the way the government is structured, the panel will also make recommendations on how to tackle corruption and share out the nation’s prosperity, according to its nine-point brief. The initiative will be subjected to a national debate and possibly a referendum before being formally adopted.

If a referendum does happen, it will likely be a dress rehearsal of the 2022 vote that will pit Odinga against Ruto, according to Manyora.

Ruto will back the new plan if it benefits the Kenyan people, but will oppose it if it only creates positions for a few, his spokesman David Mugonyi said by phone.

Odinga’s spokesman Dennis Onyango said he couldn’t talk about the BBI report because he hasn’t seen it, while Kenyatta’s publicist Kanze Dena declined to comment.

It’s unclear whether the new initiative will have the desired effect, said Bobby Mkangi, a lawyer who helped draft Kenya’s current constitution.

“In a sense, it could either be burning bridges or building bridges,” he said. “We may have to engage in a trial-and-error journey in the quest of nation-building and trying to find what works best for us and mitigate exclusion.”

--With assistance from Mike Cohen.

To contact the reporter on this story: David Herbling in Nairobi at dherbling@bloomberg.net

To contact the editors responsible for this story: Paul Richardson at pmrichardson@bloomberg.net, David Malingha, Mike Cohen