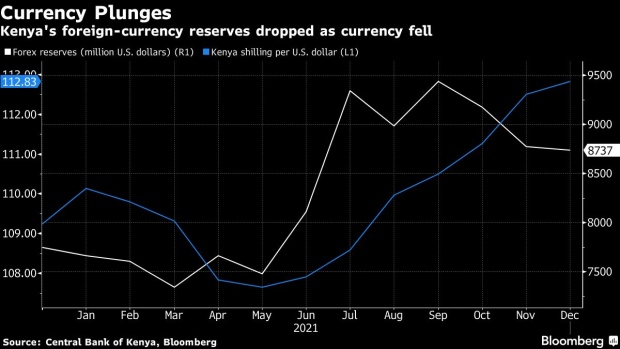 A ten Kenyan Shilling price sign sits on top of fresh lettuces and onions for sale on a stall at Toi market in Nairobi, Kenya, on Tuesday, May 26, 2020. Kenya plans to spend 53.7 billion shillings ($503 million) on a stimulus package to support businesses that have been hit by the coronavirus pandemic, according to the National Treasury. Photographer: Patrick Meinhardt/Bloomberg , Bloomberg

Kenya’s shilling extended losses Tuesday after falling to a record against the dollar, defying central-bank measures to stabilize the currency.

The shilling hit a record low of 113.08 per dollar on Monday before paring the decline. It traded less than 0.1% lower at 112.75 by 12:02 p.m. Tuesday in the capital, Nairobi. It has declined for six straight months through November, and is on track to extend that streak this month.

The currency of East Africa’s largest economy is more than 20% overvalued and likely to extend losses next year, according to Renaissance Capital, which sees fair value at 144 per dollar and projects the unit to drop to 119 next year. Still, further depreciation will probably be “contained,” easing inflationary pressures, the investment bank said in a report.

Meanwhile, the central bank’s foreign-exchange reserves fell to $8.74 billion on Dec. 2, dropping for the third straight month to the lowest level since June.