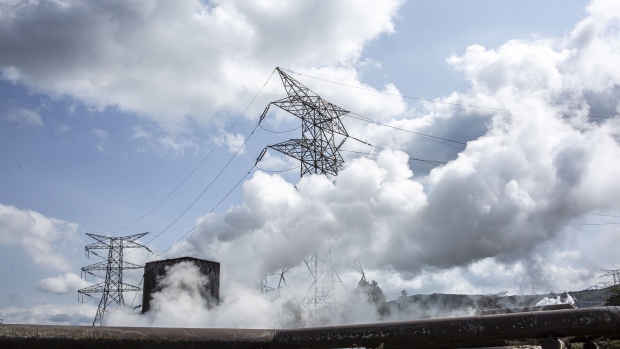 Steam billows around an electricity transmission pylon at the Olkaria Geothermal Complex, operated by Kenya Electricity Generating Company Plc (Kengen), in Hells Gate National Park in Naivasha, Kenya, on Tuesday, May 18, 2021. Kenya gets nearly half of its electricity from geothermal plants, more than any other country, according to researcher Fitch Solutions, and it’s on track to increase that to almost three-fifths by 2030. Photographer: Patrick Meinhardt/Bloomberg , Bloomberg

(Bloomberg) -- Business owners in Kenya are up in arms about soaring electricity prices, which they blamed on a legacy of mismanagement at the state-owned power distributor, and want its board to take urgent action.

The cost of electricity in the east African nation has jumped more than 70% over the past decade, raising firms’ operating costs and eroding their competitiveness, according to the Kenya Private Sector Alliance, a business lobby group.

Kenya Power & Lighting Co., which distributes all the nation’s electricity, has long been dogged by management upheaval, unsustainable levels of debt and rising costs that it’s sought to pass on to consumers. Its prices could increase again next month due a rise in fuel costs.

The company needs to be turned around and made more efficient and accountable, according to KEPSA. Its current board, which has been in office for just more than a year, had clearly analyzed its problems, and needs to deliver a turnaround strategy that includes restructuring its debt, reducing energy losses and improving its service, the lobby group said.

Kenya Power didn’t immediately respond to a request for comment.