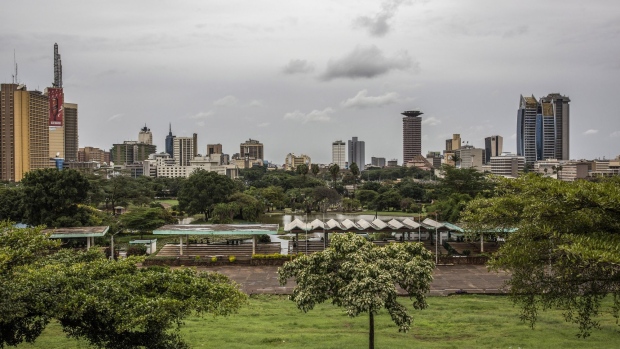 Commercial buildings and skyscrapers stand on the city skyline of Nairobi, Kenya, on Thursday, April 23, 2020. Kenya's economic growth could slow to as low as 1% this year as effects of the coronavirus pandemic take a toll on businesses and revenue, according to the National Treasury Secretary Ukur Yatani. Photographer: Patrick Meinhardt/Bloomberg , Bloomberg

(Bloomberg) -- Kenya is seeking a loan of as much as $2.3 billion from the International Monetary Fund under the lender’s extended fund facility.

Talks on a possible 3 1/2-year loan program are expected to conclude early next year, with Kenya eyeing an initial disbursement of about $725 million in the fiscal year that runs through June, National Treasury Cabinet Secretary Ukur Yatani said in an interview.

Among objectives of the loan is “continuous support of Kenya’s Covid-19 response,” Yatani said. “We are also looking at areas of reduced debt vulnerabilities through a revenue-driven fiscal consolidation.”

Yatani wants to raise and conserve funds as part of a plan to support sub-Saharan Africa’s third-largest economy after the pandemic hit public revenue and further clouded plans for fiscal consolidation.

Funding constraints have forced the government to scale back on some projects under President Uhuru Kenyatta’s so-called Big Four agenda to boost housing, manufacturing, health care and farming, according to Yatani. The National Treasury expects economic expansion this year will be under 1%, compared with growth of 5.4% in 2019.

Separately, the government is holding talks with the World Bank for a development policy operation, or DPO, loan of about $1 billion to $1.5 billion.

“We hope toward the end of the financial year, around May, June to even access part of the disbursement” from the World Bank, Yatani said. “It will all depend on a number of factors including our ability to mange within the fiscal framework.”

Kenya is also still weighing the pros and cons of participating in the Group of 20 leading economies’ Debt Service Suspension Initiative. It’s aimed at allowing low-income countries to concentrate resources on fighting the pandemic. Kenya has been hesitant to participate on the grounds that pausing payments could potentially hurt it given the nation’s debt mix.

“We have not yet made any formal application to join this arrangement,” Yatani said. “We are still studying the effect it’s going to have on the economy. We are going to make this decision in the course of time based on our own domestic situation.”

“We have no intention at the moment to renegotiate any debt,” Yatani said when asked about possibly reviewing terms of external debt under a longer term arrangement. “We are looking at other alternatives. We are cutting on the number of expenditures to fit within the fiscal framework.”

The IMF in May approved $739 million for Kenya under the rapid credit facility to help the nation deal with the virus fallout. In the same month, Kenya received $1 billion from the World Bank, which followed the lender’s approval of a $750 million package for the country last year.

The IMF’s new program will also help address weaknesses in state-owned enterprises that were exacerbated by the virus shock.

The government is doing a financial evaluation of as many as nine state companies, including Kenya Airways Plc, Kenya Power and Kenya Electricity Generating Co.

The state may provide “extraordinary support in line with the fiscal framework that we have, including injecting resources,” Yatani said. The study will include debt evaluation and governance of the companies, he said.