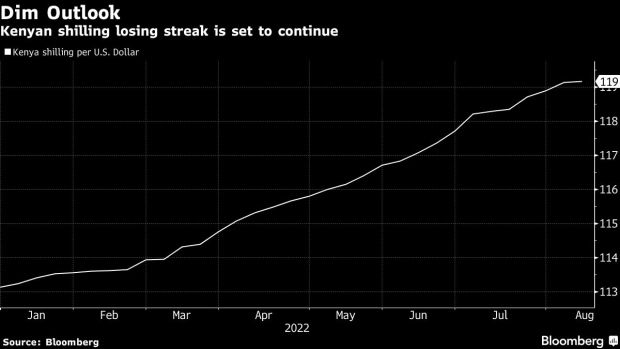 (Bloomberg) -- Kenya’s shilling slid to a record low against the dollar, widening its fall since the start of the year to 5.7%, as greenback supply dries up ahead of elections scheduled for Tuesday and amid rising demand for key imports.

The currency of East Africa’s largest economy weakened to an all-time low of 119.68 per dollar, after falling for the 14th consecutive month in July, with the longest stretch of 30-day losses on record. It recouped some losses to trade at 119.17 shillings by 1 p.m. in Nairobi.

“We expect the local currency to continue to remain under pressure due to the increasing dollar demand as global oil prices remain elevated on the back of higher import bill and reduced dollar inflows from key export-earning sectors,” according to Nairobi-based brokerage AIB-AXYS Africa.

Kenya’s biggest source of foreign currency is remittances by citizens living outside its borders. Inflows in the first half rose 17% to $2.04 billion from a year earlier, according to central bank data.

Farm produce and tourism are the second- and third-biggest contributors of foreign exchange respectively. Agricultural export earnings dropped 17% in the first quarter from a year earlier, according to the Kenya National Bureau of Statistics, while tourism income will likely slow this year, according to central bank estimations.