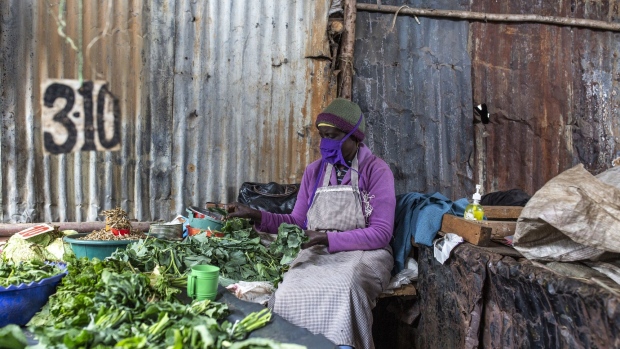 A vendor wearing a protective face mask cuts herbs and leaves for sale on her vegetable stall at Toi market in Nairobi, Kenya, on Tuesday, May 26, 2020. Kenya plans to spend 53.7 billion shillings ($503 million) on a stimulus package to support businesses that have been hit by the coronavirus pandemic, according to the National Treasury. , Bloomberg

(Bloomberg) -- Kenya’s economy contracted for the first time in almost two decades in the second quarter as the impact of the coronavirus pandemic battered key sectors.

Gross domestic product fell 5.7%, compared with growth of 4.9% in the three months through March and expansion of 5.3% in the same period a year earlier, the Kenya National Bureau of Statistics said Thursday on its website. The median of six economists’ estimates in a Bloomberg survey was for a contraction of 2.3%.

Kenya confirmed its first Covid-19 inflection in mid-March and later imposed a partial shutdown. Key foreign-income earners including tourism and exports, such as tea, flowers, fruits and vegetables bore the brunt of these measures due to lockdowns in key markets and global travel restrictions.

“The poor performance in the quarter was characterized by substantial contractions in accommodation and food services, education, taxes on products, and transportation and storage, which consequently occasioned the significant downturn,” the KNBS said.

The second quarter may have been the low point for the Kenyan economy. Leading indicators for the three months through September point to a strong recovery in activity and the central bank sees GDP growth of 3.1% for the year, according to Governor Patrick Njoroge. The International Monetary Fund revised its GDP forecast this month to growth of 1% from an earlier projection of a 0.3% contraction for the year.

Growth by agriculture, forestry and fisheries, which make up nearly a third of the economy, outpaced expansion a year earlier at 6.4% in the second quarter. That was helped by tea production, which increased 35% compared with a year earlier, thanks to favorable weather. Kenya is the world’s biggest exporter of the black variety.

Cut-flower and vegetable exports fell 35% from a year earlier, hurt by lock-down measures in key markets, such as the European Union and U.K.