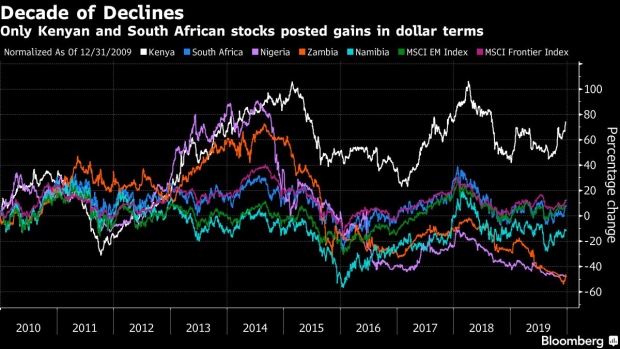 (Bloomberg) -- Among sub-Saharan African stock markets, Kenya’s proved the best performer over the past decade, joined only by South Africa in producing dollar-based gains since 2010 as currency depreciation ravaged returns for investors.

Nairobi’s benchmark gauge climbed 74% since the decade opened, with Johannesburg’s benchmark up just short of 9%. The Zambian and Nigerian stock markets have retreated almost 50%. MSCI Inc.’s gauge of developing country stocks has gained 13%, while its frontier-markets index has advanced 12%.

“Traditionally, private equity firms have been exiting through the stock exchanges,” Karim Hajji, president of the African Securities Exchanges Association, said in a phone interview. “But in recent years we have witnessed a different trend, where private equity firms are selling to other private equity funds or they are making straight sales to industries that are in the same sector.”

To contact the reporter on this story: Adelaide Changole in Nairobi at achangole2@bloomberg.net

To contact the editors responsible for this story: Blaise Robinson at brobinson58@bloomberg.net, John Viljoen, Paul Jarvis