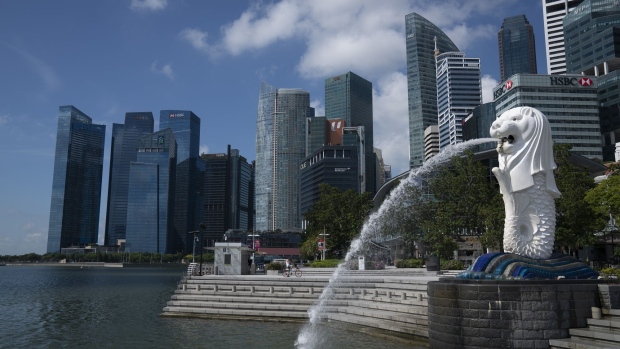 The Merlion Park waterfront stands empty in Singapore, on Tuesday, March 24, 2020. Singapore will deliver a supplementary budget and bring forward its monetary policy decision as authorities ramp up support for an economy heading toward recession. Photographer: Wei Leng Tay/Bloomberg , Bloomberg

(Bloomberg) -- Keppel Corp. shareholders approved the company’s bid to acquire a Singapore media and property group, the latest step in a rare takeover battle with a competitor that’s offering a sweeter deal.

More than 98% of its shareholders present at a meeting on Thursday voted for the deal, Keppel said in statement on Thursday. Keppel, which is linked to Temasek Holdings Pte., has said its offer to acquire Singapore Press Holdings Ltd. is final and a “win-win” proposition for both firms.

Keppel is locked in a battle with a consortium backed by a Singapore hotel tycoon and units of investment giant Temasek to buy SPH. The proposal by Cuscaden Peak Pte. values SPH at S$3.9 billion ($2.9 billion), higher than Keppel’s offer. SPH has described Cuscaden’s bid as superior and is urging shareholders to vote for it.

Now that Keppel’s shareholders have voted in favor of the deal, the ball is in SPH’s court. A vote scheduled for Dec. 8 was postponed and no new date has been set. Under the implementation agreement with Keppel, SPH must get shareholders to vote on its offer first. If they reject it, they would likely vote on the Cuscaden offer in January.

Up for grabs are assets including shopping malls located in Singapore and Australia, student accommodation in the U.K. and Germany, and a local nursing home chain, according to SPH’s website. It also has investments in the education and events business.

(Updates with details on the approval process in the fourth paragraph. An earlier version corrected the day of Keppel’s statement.)