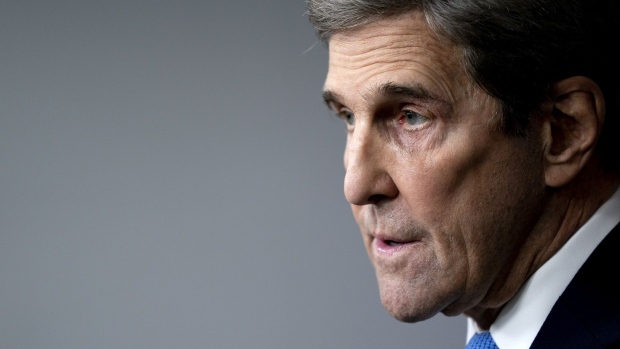 “The private sector is stepping up and will be key to what we do in Glasgow,” Special Presidential Envoy for Climate John Kerry told executives during a virtual event focused on businesses’ climate action. “As governments are laying down their commitments, your presence at the table is going to have a major impact on the choices that they make.”

U.S. lawmakers are still deliberating so-called budget reconciliation legislation that would devote hundreds of billions of dollars to expanding the use of renewable energy and clean transportation. On Thursday, Kerry told the Associated Press that if Congress fails to pass significant climate legislation, the U.S. would struggle to regain its leadership on climate. “It would be like President Trump pulling out of the Paris agreement again,” Kerry said.

White House Press Secretary Jen Psaki downplayed the significance of the congressional logjam Thursday. “None of our objectives or the president’s climate agenda begins or ends on November first and second, or the week after,” she said. “I don’t think whether our agenda is passed or not is not going to be the defining factor” at the UN climate summit.

Several executives made a push for standardized reporting of corporate climate benchmarks, including what it means to be “net-zero” and how to track emissions reductions. Regulators in the U.K. are preparing to unveil plans for requiring companies to detail their blueprints for achieving climate goals as soon as next week, Bloomberg reported.

“We all have to start using the same language,” Microsoft Corp. President Brad Smith said at the Friday event, hosted by an initiative called “Glasgow is Our Business” formed by his company and others. “Some people are claiming to be at net zero or move to net zero without counting” all of their emissions, and others disagree about how to track avoided pollution, he said.

Mastercard Inc. Executive Chairman Ajay Banga argued the U.S. needs to “standardize the manner in which we report on our progress,” because “right now, it’s all over the place.”

“This issue of investor reporting and standardized reporting is really quite mission critical,” Banga said.