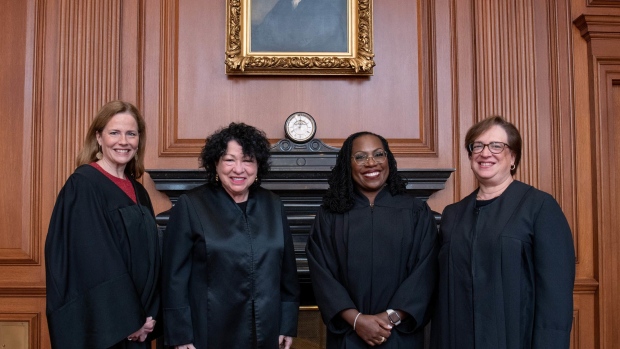 (Bloomberg) -- It didn’t take long for Justice Ketanji Brown Jackson to find her voice on the US Supreme Court.

Four arguments into her new job, the court’s first Black female justice has emerged as an active, forceful questioner, willing to directly lay out her views and even take on her more conservative colleagues. She spoke more than any other justice in her first two days on the bench.

In a Clean Water Act case on Monday, she challenged a conservative colleague’s suggestion that federal regulation might put landowners at risk of criminal penalties without fair warning. The following day in a Voting Rights Act case, she argued that the Constitution lets race be considered when it comes to redistricting.

“I don’t think that the historical record establishes that the founders believed that race neutrality or race blindness was required,” she said.

Jackson is creating a new dynamic on a court that has a 6-3 conservative majority. So far, she has shown more interest in staking out clear positions in ideologically divisive cases than in using the court’s arguments to try to bridge differences.

Her style differs markedly from that of the justice she succeeded, the now-retired Stephen Breyer, whose free-wheeling questions often suggested he was struggling to find the right answer in a case.

Jackson made her first public appearance on the Supreme Court bench Friday when the court held a formal investiture ceremony to mark her arrival. Hours later she told a cheering audience at the Library of Congress, “I have a seat at the table now, and I’m ready to work.”

Her questions have been as plentiful as they have been pointed. Jackson spoke more words -- 4,568 -- than any other justice this week, easily topping Justice Elena Kagan, who was second with 3,058, according to Adam Feldman, a lawyer who runs the empiricalscotus.com website.

In the water case -- her first -- she spoke more words than all but two colleagues and was the fourth justice to jump in with questions.

“Justice Jackson from the first moments Monday was deeply and actively engaged in both cases,” said Neal Katyal, a Washington lawyer who argued the court’s second case on Monday, a fight over the rights to hundreds of millions of dollars in unclaimed funds. Referring to Jackson’s “seat at the table” remarks, Katyal said that “on Monday, it sure seemed like she had always been sitting there.”

Jackson made her biggest mark so far in Tuesday’s Voting Rights Act case, an Alabama dispute that could mean a reduction in the number of majority-Black and majority-Hispanic legislative districts.

The new justice rejected suggestions from a lawyer representing Alabama that redistricting must be done in a race-neutral way. Jackson said the framers of the post-Civil War amendments to the Constitution were focused on racial inequalities and understood they were authorizing Congress to address them.

Those framers “were in fact trying to ensure that people who had been discriminated against -- the freedmen during the Reconstruction period -- were actually brought equal to everyone else in the society,” Jackson said. The Voting Rights Act, she said, “by its text is doing that same thing.”

At one point, Jackson juxtaposed her thinking with that of Justice Amy Coney Barrett, asking a lawyer which of the two was framing the issue the right way.

Feldman said Jackson spoke 2,269 words in that argument, a session that was scheduled for 70 minutes but lasted almost two hours. He said passing the 2,000-word mark is “pretty rare.”

In the water case, she pushed back against Justice Neil Gorsuch’s suggestion that broad federal regulation of wetlands could leave unwitting landowners facing prison time for building without permission. Jackson quickly prodded a Justice Department lawyer to describe a process that lets property owners check first with the federal government before they begin work.

“And so you’re not really facing criminal liability without the opportunity to get an assessment from the government regarding your particular circumstances,” Jackson said.

Even in a technical case about veterans’ benefits Tuesday, Jackson indicated she had a clear framework for thinking about the issue. She told an attorney that her approach to the case “sort of undermines your view.”

At one point during Monday’s first argument, Jackson may have violated the court’s informal protocols, questioning a lawyer during his rebuttal, when the justices typically let an attorney to make quick follow-up points without interruption as an argument concludes.

Politico reported seeing Chief Justice John Roberts pass a note to Jackson during her rebuttal questioning. Jackson didn’t ask questions during rebuttal in any of the last three arguments.

Jackson’s bench comments are already making her the focal point of debate. Ed Whelan of the conservative Ethics and Public Policy Center blasted Jackson’s comments in the voting rights case as “jumbled musings.”

Meanwhile, liberals are dreaming of a champion on the level of conservative icon Antonin Scalia, the justice who died in 2016.

“Give her a chance,” tweeted liberal writer Ian Millhiser of Vox, “and she’s going to burn Scalia’s legacy to the ground.”

(Updates to reflect Jackson speaking more than any other justice in second paragraph.)