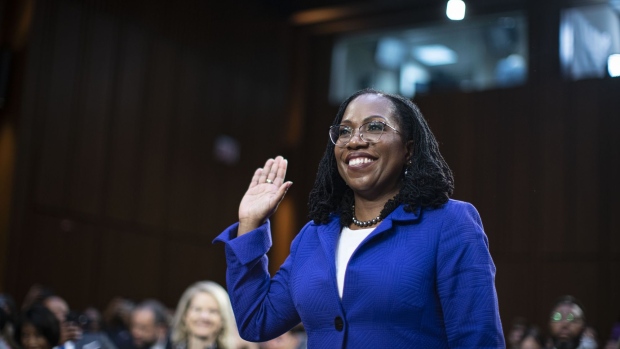 Ketanji Brown Jackson, associate justice of the U.S. Supreme Court nominee for U.S. President Joe Biden, swears in to a Senate Judiciary Committee confirmation hearing in Washington, D.C., U.S., on Monday, March 21, 2022. Jackson will make history today as she goes before a Senate panel considering her nomination to be the first Black woman on the U.S. Supreme Court. , Bloomberg

(Bloomberg) -- Ketanji Brown Jackson will be sworn in Thursday as the first Black female justice on the US Supreme Court, succeeding the retiring Stephen Breyer as a transformational term comes to a close.

Jackson was confirmed to replace Breyer in April but then had to wait until he stepped down at the end of the nine-month term, which included the blockbuster ruling eliminating the constitutional right to abortion. Breyer said in a letter to President Joe Biden that his confirmation would become effective Thursday.

The ceremony will be streamed live on the Supreme Court’s website.

Jackson, 51, is likely to maintain the ideological balance on the conservative-controlled high court and join fellow Democratic appointees Sonia Sotomayor and Elena Kagan in the liberal wing.