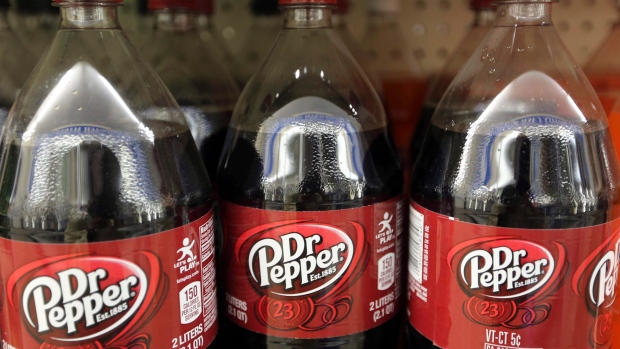 The investment firm’s Keurig Green Mountain Inc. business, known for its single-serve coffee brewers, agreed on Monday to take control of Dr Pepper Snapple Group Inc. The deal will pay US$18.7 billion in cash to shareholders and assemble a massive beverage distribution network in the U.S., giving JAB’s businesses even greater control over how Americans eat and drink.

The deal vaults JAB into competition with the likes of Coca-Cola Co. and PepsiCo Inc., bringing a stable of brands that includes 7Up lemon-lime soda, A&W root beer and Mott’s apple juice. Keurig Dr Pepper, as the new company will be known, will have pro forma 2017 revenue of about US$11 billion.

Combining the two entities will let the new company cash in on consumer trends that have drinkers turning away from once-dominant colas, said Bloomberg Intelligence Analyst Ken Shea. Though Dr Pepper has its roots in traditional soft drinks, it has added fast-growing upstart beverages like Bai Brands.

“It’s a deal that makes a lot of strategic sense,” he said. “Once it gets going and they can deliver on some of the bold things they’re talking about here, this will be a really important benchmark that investors will use to compare Coke and Pepsi against.”

Dr Pepper climbed as much as 32 per cent to US$126.65 after the transaction was announced, marking the biggest intraday rally since the shares were listed in 2008. The stock had slipped 1.5 per cent this year through the end of last week.

JAB, which is backed by the billionaire Reimann family, has been placing increasingly bold bets on food and drink businesses. At the same time, it’s shifted away from fashion holdings such as Jimmy Choo.

A big selling point of the deal is building a distribution network across the beverage industry. Keurig has relationships with e-commerce companies and tech sellers, including Amazon.com Inc. and Best Buy Co., an area where Dr Pepper isn’t as strong. Dr Pepper Snapple, meanwhile, has ties to convenience stores, drugstores and beverage vendors.

“Combined, our nationwide distribution system will be unrivaled,” Keurig Chief Executive Officer Bob Gamgort said on a call with analysts.

That could boost market share for the new combined company in coffee and other soft drinks. Keurig was the fourth-largest coffee seller in the U.S. in 2017, with 7.4 per cent of the market, according to Euromonitor International. Dr Pepper Snapple, meanwhile, was the third-largest soft-drink maker, with a 8.5 per cent share.

JAB, run by consumer-goods industry veterans Peter Harf, Bart Becht and Olivier Goudet, has transformed the fast-food and drink industries with a series of acquisitions that grew from a 2013 deal for the owner of Douwe Egberts coffee. That business was combined with Mondelez International Inc.’s Jacobs coffee in 2015.

Other acquisitions included Panera Bread Co., the Einstein Noah Restaurant Group, Peet’s Coffee & Tea, Stumptown Coffee Roasters and Au Bon Pain. Mondelez -- the maker of Oreo cookies and Triscuit crackers -- is an investor in Keurig as a result of the 2015 deal and will hold about 13 per cent to 14 per cent of Keurig Dr Pepper.

For Keurig, this isn’t the first time the company has been tied up with Big Soda. Coca-Cola owned a 17 per cent stake in the business before JAB’s acquisition. That holding had previously spurred talk that the Atlanta-based soda giant would buy Keurig outright. Coca-Cola recorded a gain of about US$25.5 million on the investment when Keurig and JAB concluded their deal.

Meanwhile, JAB has moved to divest its luxury holdings. It sold stiletto shoe maker Jimmy Choo to Michael Kors Holdings Ltd. and jacket brand Belstaff to chemical company Ineos. Shandong Ruyi Group of China is the leading bidder for Bally International AG, the Swiss leather-goods brand owned by JAB, according to people familiar with the situation.

Dr Pepper Snapple itself is the product of serial dealmaking, principally by Cadbury Schweppes, which bought the Dr. Pepper and 7Up assets in 1995 and added Snapple in 2000. Cadbury, the U.K. chocolate maker that’s now owned by Mondelez, spun off the beverage assets and listed them in New York in 2008.