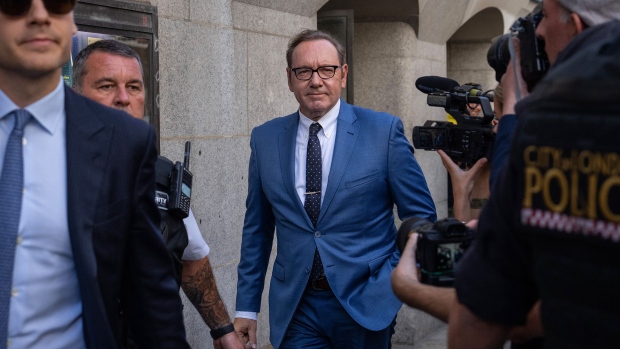 (Bloomberg) -- Actor Kevin Spacey was ordered to pay $31 million to the “House of Cards” production company for alleged sexual misconduct that got him booted from the popular Netflix series and upended his once high-flying career.

Spacey, 63, had starred in five seasons of the White House drama in 2017 when allegations surfaced that he had a history of sexually harassing and in some cases assaulting young men.

Producer MRC II Distribution Co. fired him and wrote him out of the final season, which was trimmed from 13 to 8 episodes. It also did its own investigation, which added five House of Cards crew members to the list of men accusing Spacey of misconduct.

The company said Spacey’s misconduct was a violation of his contract and sued him for damages in private arbitration.

After 20 depositions and an eight-day evidence hearing, an arbitrator ruled against Spacey and ordered him to pay MRC $29.5 million in damages plus expenses and legal fees of $1.5 million.

Spacey objected to the award, claiming that it was based on allegations that had nothing to do with his work for MRC. But Los Angeles Superior Court Judge Mel Red Recana rejected Spacey’s argument and affirmed the $31 million arbitration award in a 14-page ruling Thursday.

Recana said the arbitrator had “found that Spacey’s conduct constituted a material breach of his acting and executive producing agreements” with MRC.

“We are pleased with the court’s ruling,” MRC lawyer Michael Kump said.

Spacey’s lawyer didn’t immediately respond to a request for comment.

The actor was charged in May by UK authorities with four counts of sexual assault.