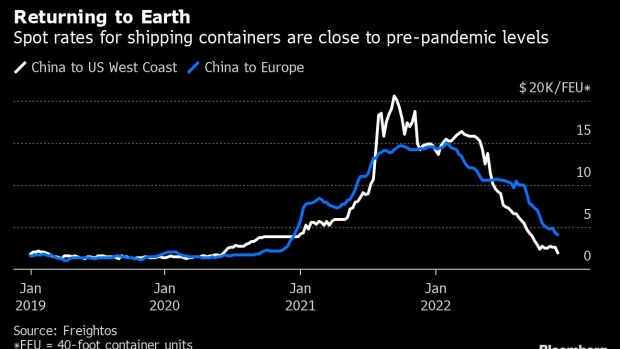 A worker arranges fruit and vegetables for sale at a store in Buenos Aires, Argentina, on Friday, Nov. 18, 2022. Argentina's annual inflation surged last month as the government implements price freezes on over a thousand consumer goods in attempt to cool cost-of-living increases. Photographer: Erica Canepa/Bloomberg , Bloomberg

(Bloomberg) -- Global inflation is showing signs of having peaked, although a likely slow retreat from multi-decade highs means it will remain a bugbear for central banks into 2023.

Key inflation gauges released in the US and euro area this week both weakened, while factory-gate prices and inflation expectations among investors are also ebbing.

Supply chains complicated by the pandemic and Russia’s war in Ukraine are easing, and food and fuel costs have retreated too.

Also likely starting to have an effect, albeit on a lagged basis, are the higher interest rates pursued by central banks after inflation soared faster and for longer than they anticipated.

Such a backdrop helps explain why Bloomberg Economics estimates worldwide inflation topped out at 9.8% year-on-year in the third quarter, and is now headed to 9.5% in the final three months of the year and 5.3% at the end of 2023.

But risks remain: Supply chains still have yet to fully heal, commodity prices could rise anew if China reopens and workers stung by the high cost of living may continue to force up wages.

For policymakers, the recent peak “doesn’t mean the worst is over,” said Tom Orlik, Bloomberg’s chief economist. “Even as they edge down, consumer price readings will remain way above the comfort zone for central banks, necessitating further tightening even as recession risks loom.”

Here are the key charts which point to a potential peak:

--With assistance from Brendan Murray, Garfield Reynolds and Andrew Atkinson.