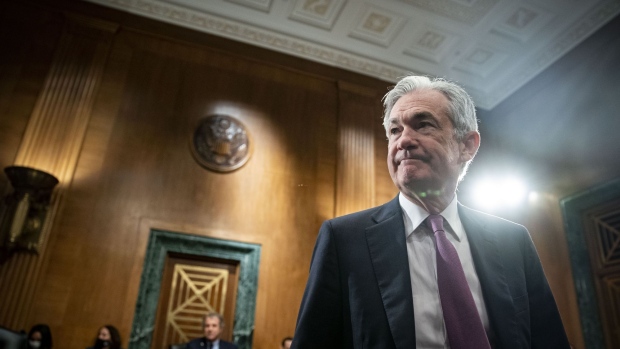 (Bloomberg) -- Federal Reserve Chairman Jerome Powell has picked up a handful of fresh endorsements from U.S. senators this week for another four-year term, but several key Democrats aren’t yet sold.

Powell’s term as chair of the U.S. central bank ends in February and President Joe Biden is expected to name a replacement for at least that seat this fall. Biden also has a chance to fill the positions of vice chair, vice chair for supervision and a vacant board seat.

Powell enjoys broad bipartisan support for confirmation but interviews by Bloomberg with more than a dozen senators this week suggest he still has some work to do to gain the backing of Senator Joe Manchin of West Virginia and leading progressives who could be influential in Biden’s decision-making.

Manchin, a conservative Democrat, criticized the Fed’s trillions in asset purchases when asked in a hallway interview with Bloomberg if he’d back Powell for another term.

“It makes no sense to me at all what we’ve been doing for the last year, no sense at all,” said Manchin, who wrote Powell last month asking the Fed to ratchet down its bond buying program, which was instituted at the start of the coronavirus pandemic to support the economy. “Why are we jumping in buying our own paper and doing all this when the market is the most robust it’s ever been?”

No Democrat, however, has yet said they would vote against Powell nor publicly urged the White House to back another leading contender, Fed Governor Lael Brainard. Powell also has the backing of Treasury Secretary Janet Yellen.

“It’s the management of the fiscal policy of the country, so I think he has gotten good marks and I know I have confidence in him,” said Democrat Ben Cardin of Maryland.

Brainard, who Biden considered for Treasury secretary before nominating Yellen, has been praised by Warren and outside progressive advocacy groups for her dissents to deregulatory actions backed by Powell.

The White House is considering naming Powell to another term and elevating Brainard to the position of vice chair of supervision. But some are concerned that even as the board’s chief banking regulator, she would still answer to Powell.

If Powell were nominated and cleared by the Senate Banking Committee, which is likely, he would probably cruise to confirmation thanks to the support of a large number of Senate Republicans, even if the chair appointed by Donald Trump loses some Democratic votes. A simple majority is all that’s required.

Warren declined to state a preference, though she has previously focused on the need for the Fed chair to protect the economy from another financial disaster like the 2008 crisis.

Republicans generally see Powell as the best they could get out of Biden, though some have sharply criticized his handling of inflation, which could limit the number of confirmation votes.

Among the Republicans endorsing Powell for another term this week are Rob Portman of Ohio, Shelley Moore Capito of West Virginia, John Kennedy of Louisiana and Jerry Moran of Kansas.

“I would prefer to have him at the helm,” said Portman, one of a small number of sitting Senate Republicans who also voted to confirm Brainard as a Fed governor.

Kennedy, a member of the Banking panel, added he would renominate Powell “in a nanosecond” if he were in charge. “I don’t agree with everything he’s done but I think overall he’s done a good job, and I think if the president replaces him right now, given the fragility of our economy, it’s going to cause turmoil in the capital markets.”

Many have still held off, including top Banking Republican Pat Toomey of Pennsylvania and former Chair Richard Shelby of Alabama.

Toomey has warned against the Fed getting behind the curve on inflation and against moves on issues he considers beyond the Fed’s congressional mandate like climate change and racial justice.

Shelby called Powell an “able” guy but warned of inflation rising on his watch. He dismissed Brainard as the pick of the “ultra left.”

Some progressive groups like Public Citizen have come out for Brainard as someone more likely to take on Wall Street and climate risks than Powell.

Whitehouse, however, recently tweeted that if Powell wants to find a middle ground “between the warnings of science and the lies of the fossil fuel industry, he has to go.”

Whitehouse told Bloomberg News this week that Powell could still gain his support, but the Fed’s handling of climate risks will help make his decision.

“When Freddie Mac warns of a mortgage meltdown worse than the 2008 mortgage meltdown because of a crash in coastal property values, a Rhode Island senator pays attention,” Whitehouse said, while also noting risks of a “carbon bubble” and insurance industry concerns.

“There’s a lot to worry about and the Fed chief needs to worry,” he said.

Other Democrats have previously said they would back a Powell pick, including Richard Blumenthal of Connecticut, who voted against Powell but has since been won over, and Finance Chairman Ron Wyden, who has had high praise for both Powell and Brainard but said he trusts Biden to make the choice.