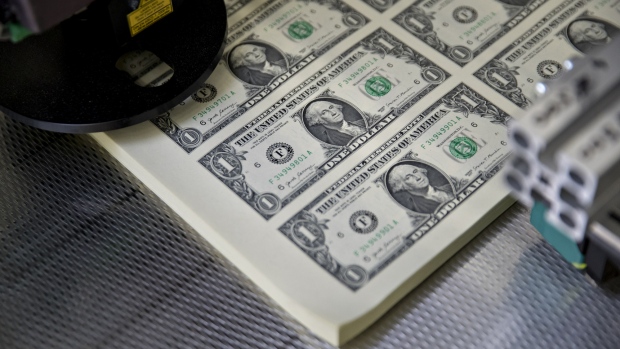 Stacks of 2017 50 subject uncut sheets of $1 dollar notes bearing the name of U.S. Treasury Secretary Steven Mnuchin sit in a machine at the U.S. Bureau of Engraving and Printing in Washington, D.C., U.S., on Wednesday, Nov. 15, 2017. A change in the Senate tax-overhaul plan that would expand a temporary income-tax break for partnerships, limited liability companies and other so-called "pass-through" businesses won the endorsement of a national small-business group today. , Bloomberg

A gauge of U.S. economic health closely watched by the Federal Reserve is flashing warning signs for the second time this year.

The near-term forward spread, which reflects the difference between the forward rate implied by Treasury bills six quarters from now and the current three-month yield, fell back below zero on Friday for the first time since January. A negative reading shows the market expects monetary policy easing during the next 12 to 18 months.

Its last foray into negative territory was the first time it had done so in ten years, and preceded Chairman Jerome Powell’s signals that the central bank was in no rush to hike interest rates.

The Fed has referenced the gauge more frequently in its policy deliberations since economists highlighted its power in predicting recessions in July last year. The central bank’s rate-setting committee noted in minutes from its January meeting that the spread “was in the lower end of its historical distribution” during the month. 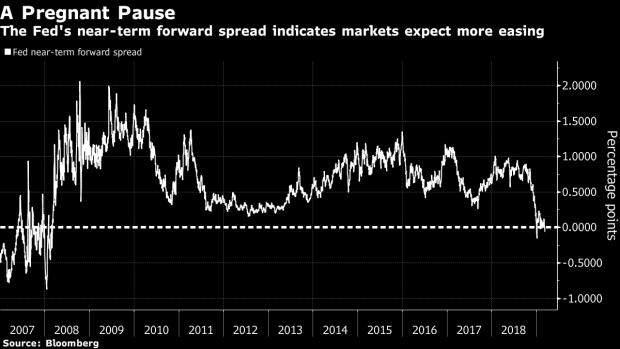 The spread between the two-year and 10-year Treasury note, another closely watched indicator known for its power in predicting recessions, remains in positive territory but is trading close to levels last seen in 2007. A Federal Reserve paper from July argued that the near-term forward spread was a more statistically-meaningful indicator.