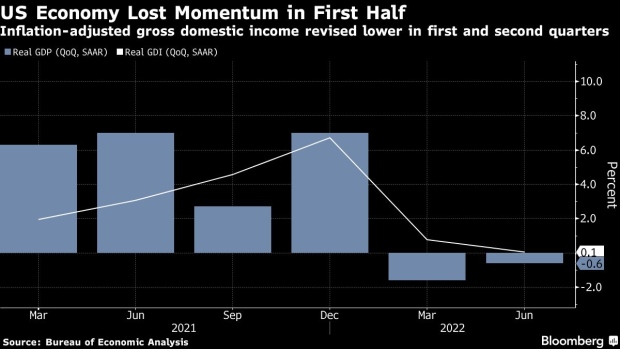 Shipping containers at the BNSF Railway Hobart Yard rail terminal in Vernon, California, US on Wednesday, Sept. 14, 2022. Railroads and unions have until Friday to resolve a labor dispute that risks a crippling shutdown of the nations freight-rail network, wreaking havoc on the US economy. Photographer: Bing Guan/Bloomberg , Bloomberg

(Bloomberg) -- A gap in the government’s two primary measures of US economic activity during the first half of 2022 narrowed, pointing to a significant loss of momentum during the period.

Inflation-adjusted gross domestic income -- one of the government’s main measures of economic activity -- rose at just a 0.1% annualized rate in the second quarter, Commerce Department figures showed Thursday. That represents a sharp downward revision from the previously reported 1.4% gain.

The average of real gross domestic product and GDI, an equally weighted supplemental measure of economic activity, decreased 0.3% in the second quarter after falling 0.4% in the first. Those figures stand in contrast to the previously reported positive readings for both quarters.

The figures are important because the official arbiter of US expansions and recessions, the National Bureau of Economic Research’s Business Cycle Dating Committee, will use the average and a range of other economic variables to make any recession call.

In the first half of this year, economists had pointed to the strength of the GDI readings as evidence that the economy was on firmer footing than the negative GDP prints had indicated. However, the latest revisions suggest a notable softening.

The Bureau of Economic Analysis also released its annual update of the national economic accounts Thursday. That update showed the economy’s rebound from the pandemic was more robust than previously thought.

Beginning with an upward revision for the third quarter of 2020, when the economy was starting to escape the clutches of Covid lockdowns, growth was marked higher in most quarters through 2021.

Looking at the breakdown of the value added by industry, nine of 22 contributed to the second-quarter decline in real GDP, led by a pullback in construction, non-durable manufacturing and wholesale trade.

Another concern in the latest data, figures on personal income and saving were revised lower and suggest less fuel for household spending going forward. Inflation-adjusted disposable income after taxes decreased 1.5% in the second quarter, compared with a previously reported 0.6% decline. The saving rate was revised down to 3.4% from 3.8%.