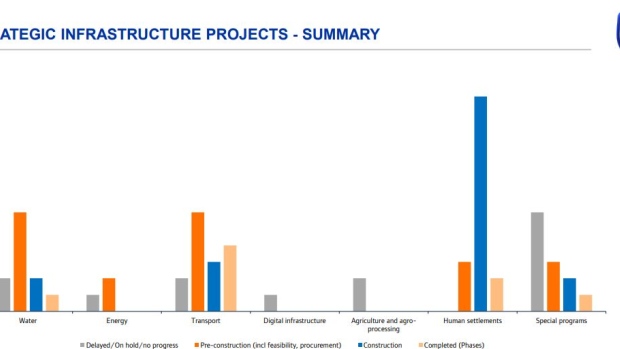 (Bloomberg) -- Almost a quarter of South Africa’s 340 billion ($21.7 billion) worth of strategic infrastructure projects have been delayed or put on hold, according to Standard Bank Group Ltd.

The government in Africa’s most-industrialized economy has officially announced 62 energy, water, sanitation and other projects, known as SIPs. While eight have been completed and 40 are underway, 14 are behind schedule, the bank said in a May 25 report that monitors their progress.

The rollout of one project -- a plan worth billions of dollars to build 2,000 megawatts of new power-generation as quickly as possible -- has been held up by court cases and state-owned Eskom Holdings SOC Ltd., the bank said. The delay comes as South Africa heads for a record year of disruptive power outages because the utility is unable to meet demand.

Increased infrastructure investment underpins plans unveiled by President Cyril Ramaphosa in October 2020 to boost the country’s economic growth rate, after the biggest contraction in a century that year. Investment as a percentage of South Africa’s gross domestic product has been in decline since 2016 and was projected to hit a record low of 12.2% last year, according to International Monetary Fund data published in February.

Other SIPs have been put on hold due to funding gaps, according to the bank. Similarly, a 4 billion-rand initiative for The South African National Space Agency to develop a Space Infrastructure Hub has made no progress, it said.