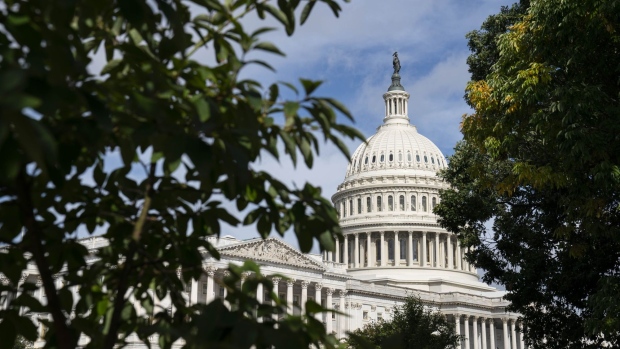 The U.S. Capitol building in Washington, D.C., U.S., on Tuesday, Sept. 21, 2021. House Democrats set up a Tuesday vote on a bill that would suspend the U.S. debt ceiling through December 2022 and temporarily fund the government to avert a shutdown at the end of this month. Photographer: Sarah Silbiger/Bloomberg , Bloomberg

(Bloomberg) -- Stablecoin regulation was front and center at a Congressional hearing on crypto Wednesday that was surprisingly cordial -- likely due to the absence of a key and controversial industry player.

The House Financial Services Committee hearing featured executives from exchanges FTX and Coinbase Global Inc., as well as stablecoin issuers Circle and Paxos, all of whom largely agreed with lawmakers that greater regulation of crypto is needed. The cordial tone was in sharp contrast to the combative hearing two years ago, when Meta Platforms Inc. Chief Executive Officer Mark Zuckerberg was grilled by the same committee over his company’s plan for a slew of stablecoins via a project called Libra. Under regulatory and congressional pressure, Libra -- later renamed Diem -- has dramatically scaled back its ambitions.

Fast forward to today, where most crypto executives already knew tougher regulation was coming. The President’s Working Group on Financial Markets recently proposed for stablecoin issuers to effectively become banks, with ensured deposits. The witnesses worked to calm any concern about the potential destabilizing impact of stablecoins on financial markets.

Notably absent from the hearing were executives from Tether, the world’s biggest stablecoin with an estimated market value of about $76 billion. Plenty of allusions to Tether were made, however, as participants talked about the need for greater transparency of stablecoin reserves. Stablecoins -- so named because their value isn’t supposed to change much -- are usually pegged to assets such as fiat, typically the dollar. And most are supposed to hold reserves equal to the underlying currency or its equivalents.

Several years ago, Tether got in hot water with the New York Attorney General when it came out that it wasn’t fully backed at one point. What’s also unclear -- but could be clarified by new laws -- is if whether some of the reserves can be held in assets such as commercial paper, as Tether has claimed.

Barclay Capital analyst Joseph Abate said in a note Wednesday that, “we estimate that Tether’s immediately available liquidity might be as much as $28 billion or 40% of assets, which is similar to prime money funds. But $7 billion of this is in bank deposits with unknown availability.”

Tether, which is based outside the U.S., didn’t immediately respond to a request for comment on the hearing.

Policymakers also discussed improvements in oversight of exchanges. Coinbase, represented by Chief Financial Officer Alesia Haas, reiterated its plea for a single regulator -- possibly an existing one -- to be appointed as the main overseer for crypto. She said the companies need one authority to check with if a coin is a security, or to release a new product. Earlier this year, due to pressure from the Securities and Exchange Commission, Coinbase axed plans for its Lend product, which would have let customers earn interest on their coins by lending them out.

“We still do not have clarity on why our product wasn’t allowed to proceed,” Haas said. Coinbase stores 12% of the world’s crypto on its platform, she said.

On Dec. 14, the Senate Committee on Banking, Housing and Urban Affairs will hold a hearing on stablecoins and their risks.