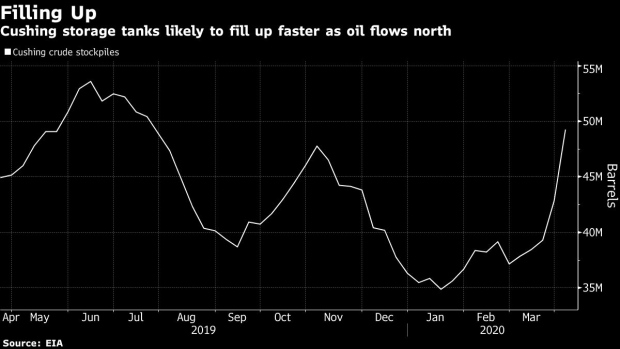 Fuel lines sit connected to underground storage tanks as fuel is delivered at a Phillips 66 gas station in Princeton, Illinois, U.S., on Wednesday, April 1, 2020. Even with the combination of some Canadian pullback, stripper wells going offline and announced shale cuts, that may not be enough to stop oil prices from going lower as demand craters and supply from OPEC means major increases in stockpiles in the second quarter. Photographer: Daniel Acker/Bloomberg , Bloomberg

(Bloomberg) -- In the latest sign that the oil market has gone off-kilter: crude oil is once again set to move from the U.S. Gulf Coast to Cushing, Oklahoma, reversing years of flows as tanks along the coast fill up.

Enterprise Interstate Crude LLC, a subsidiary of Enterprise Products Partners LP, said in a filing to regulators Monday that it planned to start a temporary service using leased pipeline capacity after receiving interest from at least one shipper to move oil inland to America’s biggest storage hub. Enterprise plans to ship from its station in Katy, Texas, which is on its Seaway dual-pipe system, from May.

The Houston-based midstream company will be offering dual-direction service on its Seaway Legacy crude pipeline until further notice using a connection to the Katy terminal, according to a person familiar with the matter. Use of this connection has varied month to month on its southbound flow, the person said. Seaway Legacy pipeline has a capacity of 400,000 barrels a day while Seaway Twin can ship 450,000 barrels a day of oil. The Seaway system is jointly owned by Enterprise and Enbridge Inc.

This arrangement allows Enterprise to utilize unused capacity from Katy to Cushing on Seaway, company spokesman Rick Rainey said in an email. “Seaway remains ​fully committed to fulfilling all shipper demands to move crude oil from Cushing to the Houston area without interruption.”

Measures to stem the Covid-19 outbreak have cut U.S. gasoline demand by almost half from a year ago. Refineries in the Gulf Coast have been forced to cut operations to a minimum just as a price war between Saudi Arabia and Russia flooded the world with crude.

That makes Cushing, which can hold just over 76 million barrels of crude, an attractive spot to store the excess. The hub held 49.2 million barrels as of April 3, according to government data. Oil for prompt delivery is at a steep discount to later months, further encouraging traders with access to tanks to store it.

“The reversal, albeit likely short lived, will cause Cushing stock builds at a continuing blistering pace in May,” Stephen Wolfe, head of crude oil at consultant Energy Aspects Ltd. “So, with any reversal into the hub, even if at low volumes, Cushing easily hits tank tops by early May.”

Enterprise’s 2012 reversal of the Seaway Legacy pipeline to carry crude to the coast from Cushing, the delivery point for West Texas Intermediate futures, was a watershed moment for the U.S. shale boom, as the center of the country no longer needed to rely on overseas supplies.

The reversal allowed growing supplies of low-cost U.S. and Canadian oil to displace seaborne imports, and helped the country become of of the world’s leading suppliers after export restrictions were loosened in 2015. It also led to a substantial narrowing of prices for WTI and the global benchmark Brent, one of the most widely traded crude spreads in the world.

“Given the current turmoil in the crude oil market, including impacts on both refinery and export demand, there is strong market interest to access the Cushing storage market,” Enterprise wrote in the filing.

(Updates with comments from Enterprise spokesman in fourth paragraph)