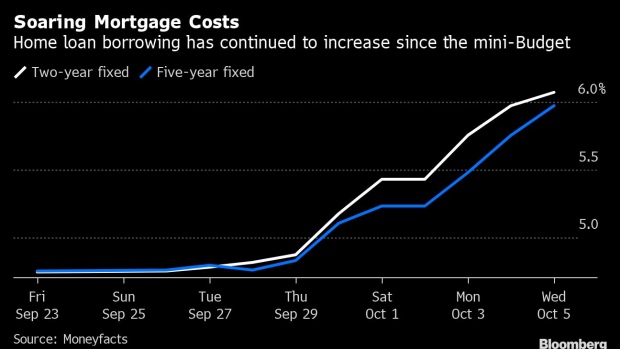 The squeeze on finances for thousands of British homeowners is set to intensify after a key rate on mortgage borrowing costs climbed to its highest level in almost 14 years.

The average two-year fixed-rate mortgage on a home rose to 6.07% on Wednesday, the highest since November 2008, according to Moneyfacts Group Plc. The average five-year fixed rate deal also closed in on 6%, a level not seen since February 2010.

UK Chancellor Kwasi Kwarteng jolted markets on Sept. 23 with a so-called mini-budget that comprised unfunded tax cuts. This sent yields soaring on interest-rate swaps, which lenders use to price mortgage products. The government’s decision on Monday to roll back the most contentious tax cut following a backlash within the Tory party has so far failed to stop rates rising.

Executives from lenders including Barclays Plc and Natwest Group Plc are set to meet with Kwarteng on Thursday to discuss the recent turmoil in the mortgage market, according to Sky News. The chancellor is expected to quiz banks on their plans following an exodus of mortgage products from the market.

Higher borrowing costs for lenders mean the average monthly cost of a two-year fixed-rate mortgage will rise to about £1,325 ($1,508) per month, from £725 in 2021, Bloomberg Economics estimated last week.

“Borrowers may well be concerned about the rise to fixed mortgage rates but it’s essential they seek advice to assess the deals available to them,” said Rachel Springall, a spokesperson for Moneyfacts. “Consumers must carefully consider whether now is the right time to buy a home or to wait and see how things change in the coming weeks.”

(Adds Thursday meeting between Kwarteng and lenders in fourth paragraph.)