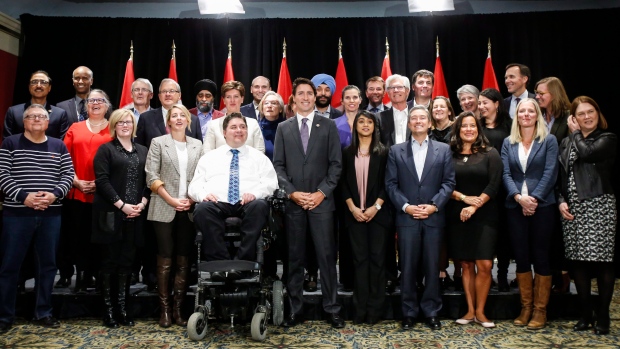 The Liberal cabinet poses for a photo in Calgary on Jan. 24, 2017 , The Canadian Press

Speaking in Calgary after a cabinet retreat, Trudeau said he has spoken to U.S. President Donald Trump twice in recent weeks.

"In both the conversations I've had with President Trump now Keystone XL came up as a topic and I reiterated by support for the project," Trudeau said.

"I've been on the record for many years supporting it because it mean's economic growth and good jobs for Albertans."

Trudeau also said that Canada's plans to protect the environment, which include Alberta's absolute cap on oilsands emissions, mean that "we can get our resources to market safely and responsibly while meeting our climate change goals."

Trump on Tuesday signed an executive order advancing Keystone, although he offered few details of what his order covers. He did say he wants Keystone XL details renegotiated and signed another order saying U.S. pipelines should use U.S. steel.

"We have been supportive of this since the day we were sworn into government," said Natural Resources Minister Jim Carr. "We believe it's a good project for both Canada and the United States."

He said the project would be very positive for Canada, creating 4,500 construction jobs and deepening of relations with the U.S.

The pipeline has drawn criticism for both the potential for leaks to contaminate the environment and for the boost in greenhouse gases it could help produce.

Foreign Affairs Minister Chrystia Freeland said the project goes along with the government's twin pillars of jobs and the environment.

"Our position from the start has been that the environment and the economy go together. We really believe that it is not just possible but essential to have strong policies on climate change -- the strongest policies a government of Canada has ever had on putting a price on pollution -- and at the same time to fulfil our duty as a government of getting our natural resources to market."

Calgary Mayor Naheed Nenshi, who met the federal cabinet this morning to discuss the challenges facing his city after more than two years of an energy downturn, said the pipeline is important for a recovery.

"We have the highest unemployment rate of any major city in Canada," he said. "One of the best ways for us to approach that is to continue to build these projects. These projects create good, decent jobs here in Calgary, as well as in the field and they are a great way to help our economy recover."

He said the project is also needed to increase market access for the country as a whole.

"It is important for Canadian energy to have access to global markets," Nenshi said. "It's important for the prosperity of our nation for that to happen."

The success of the Alberta-to-Texas pipeline is, however, not guaranteed, with significant pockets of local opposition in the U.S., and Trump holding out for a renegotiated agreement.

The cabinet is holding a two-day retreat in Calgary, with Canada-U.S. relations dominating discussions.