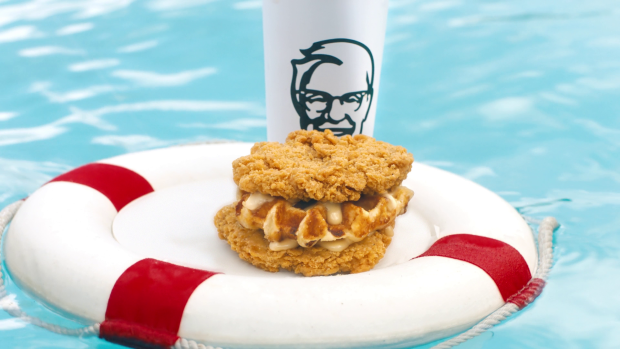 KFC is doubling down on its efforts to appeal to the Canadian market.

The fast-food chain is bringing back its breadless sandwich — but with a new, sugary component meant to offset, or perhaps supplement, the bun proxy that is the savoury deep-fried chicken.

Like the original Double Down, the latest incarnation also features two chicken fillets in the place of bread, but instead of the bacon-and-cheese filling there’s a Belgian waffle drizzled in a maple-aioli sauce.

“We know fans have been craving chicken and waffles on our menu, and we're happy to provide this unique take on the trendy food pairing. The maple aioli sauce is a sweet nod to KFC's Canadian fans,” Samantha Redman, chief marketing officer of KFC Canada, said in a press release.

There were polarizing reactions to the Double Down when it debuted in 2010. But even so, KFC sold 350,000 of the sandwiches in Canada in the first 10 days, according to a press release Thursday.

The Waffle Double Down joins the Zinger Double Down as another one of KFC’s variations on the traditional recipe, and will be available for a limited time starting March 26.