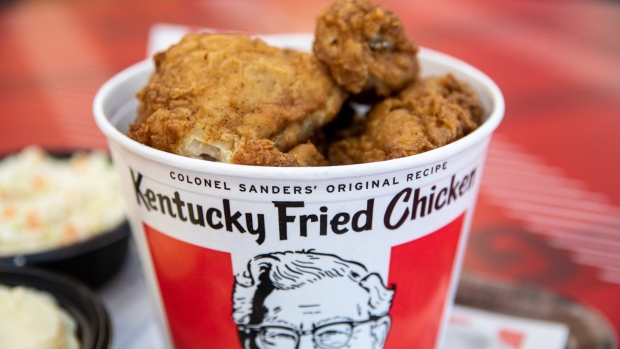 (Bloomberg) -- KFC Corp.’s top price negotiator told executives for Pilgrim’s Pride Corp. in 2017 that “he was going to beat us down with a hammer and a baseball bat” as payback for three years of high chicken prices. That’s according to the government’s star witness in the trial of 10 chicken-industry workers and executives charged with criminal price-fixing.

Robert Bryant, a longtime Pilgrim’s Pride employee currently on leave, testified in Denver about talks between Pilgrim’s, the No. 2 U.S. chicken producer, and the company that manages supply for Yum! Brands Inc.’s  KFC, Pizza Hut and Taco Bell fast-food restaurants. The KFC negotiator, Pete Suerken, was working on a new contract with Pilgrim’s after a three-year deal that included unprecedented price increases, according to Bryant, who took the stand Monday and Tuesday.

At the heart of the matter is whether the defendants conspired to inflate prices in the $95 billion U.S. market. During opening remarks last week, Justice Department lawyer Michael Koenig said the insiders, who worked for competing chicken companies including top producer Tyson Foods Inc., came together to create “massive, historic price increases” and stonewalled efforts by customers including KFC to negotiate them lower.

The defendants, who include former Pilgrim’s chief executives Jayson Penn and William Lovette, have all pleaded not guilty and are fighting the charges in the trial. They claim there was no conspiracy to fix prices or rig bids. Efforts to discover details of competitors’ prices were legal and chicken prices were the result of market forces, not illegal collusion, they said.

Bryant is taking the stand with immunity as a result of a Pilgrim’s plea deal, and his testimony has been hotly anticipated as key to the government’s case. On cross-examination, Bryant admitted that he had lied to the FBI “multiple times” on matters unrelated to the price-fixing investigation. The subject of Bryant’s lies wasn’t made public.

Bryant on Monday coolly pointed out for jurors the former colleagues and industry contacts who face charges that could land them in prison and bring million-dollar fines. He said Pilgrim’s and its competitors routinely shared information about pricing and planned bids “to increase prices or to limit a decrease, depending on the market conditions.”

“My understanding is it was a two-way street,” Bryant told jurors. “We received their prices and they received ours.”

He testified that the goal in 2014 was to raise prices. In 2017, the aim was to limit the damage at a time when prices were declining. KFC that year forced Pilgrim’s Pride to reduce prices and decreased the company’s volume, in retaliation for the earlier contract.

Prosecutors showed jurors Bryant’s handwritten notes from 2017 showing what he testified were planned bids by five Pilgrim’s competitors, including Tyson. Suppliers bid every year on contracts with the biggest fast-food companies, including KFC, Chick-fil-A Inc. and Popeyes Louisiana Kitchen Inc. The contracts help set the business prospects for the companies as well as the prices paid by people who eat chicken.

Bryant conceded, under cross-examination by lawyer Michael Feldberg, that the numbers in his notes didn’t match the actual prices that were later charged by the companies. Feldberg pressed Bryant to acknowledge market influences on chicken prices, including severe shortages in 2014. And he suggested Bryant is lying about an agreement among the defendants to fix prices to curry favor with the government and avoid facing criminal charges himself.

While the evidence covers alleged efforts to fix prices and rig bids from 2012 to early 2019, the findings could set the stage for further moves against the industry, which has caught the ire of the Biden administration. Officials have said meatpackers engaged in “pandemic profiteering,” squeezing consumers and farmers.

Greeley, Colorado-based Pilgrim’s Pride, a unit of Brazilian food giant JBS SA, pleaded guilty to price-fixing conspiracy in February and was sentenced to pay $108 million in fines. As part of the plea deal, Pilgrim’s agreed to cooperate with the government investigation. In a statement last week, the company said it is “focused on maintaining our commitment to fair and honest competition in compliance with U.S. antitrust laws.”

Tyson last year said it was cooperating with the Justice Department.

All are charged with violating the Sherman Act, a law that dates to 1890 and is intended to preserve competition in U.S. markets. Each defendant is charged with a single count of conspiracy to restrain trade, which carries a maximum of 10 years in prison. Little is also charged with obstruction of justice, which has a 20-year maximum.

Four other former Pilgrim’s employees were charged separately and face trial next year.