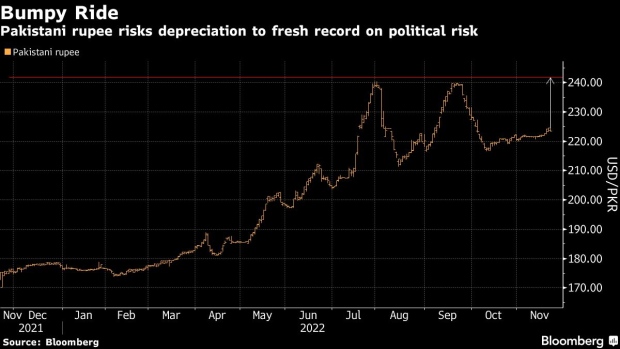 Khan, who was shot three weeks ago, is set to mobilize tens of thousands of his supporters to press for early elections, which aren’t due until October. The assassination attempt has aggravated tensions with the government, with Mackay Shields UK LLP and Tellimer Ltd. warning the rupee may decline about 10% to a record low in the coming months.

The tussle between Khan and Prime Minister Shehbaz Sharif comes at a critical juncture for Pakistan, which is struggling to meet a funding gap while dealing with an economy devastated by floods. The currency and stock markets had only recently rebounded from lows after the International Monetary Fund gave a $1.2 billion bailout.

“The absence of any visibility over the political outlook – with scenarios ranging from an early election, a muddle-through of the existing government and the imposition of martial law all equally likely – means any short-term investment case in local currency assets is hard to support,” said Hasnain Malik, a strategist at Tellimer in Dubai.

Pakistan is under pressure to raise funds to meet a financing gap estimated at $7.3 billion through June by Bloomberg Economics. While the currency had rebounded 6% from a record low of 240.375 per dollar reached in late July, it’s still down more than 25% this year, among the worst in Asia.

The stock market has risen about 4% in November so far, but is still down by a similar magnitude for the year.

Amid calls for postponing his protest, Khan has blamed -- without providing proof -- Prime Minister Sharif and other officials for the shooting during a rally on Nov. 3. They deny the charges. The government has said the demonstration may see terror attacks.

The developments in Pakistan “comes at a time when the economic backdrop is extremely challenging,” said Philip Fielding, co-head for emerging-market debt at Mackay Shields in London. “Markets are correct to heavily discount the repayment capacity of the sovereign.”

The nation will repay its debt on time, Finance Minister Ishaq Dar reiterated last Saturday. The 7.375% 2031 dollar bond is close to a record low of about 30.7 cents on the dollar, which it touched in early November.