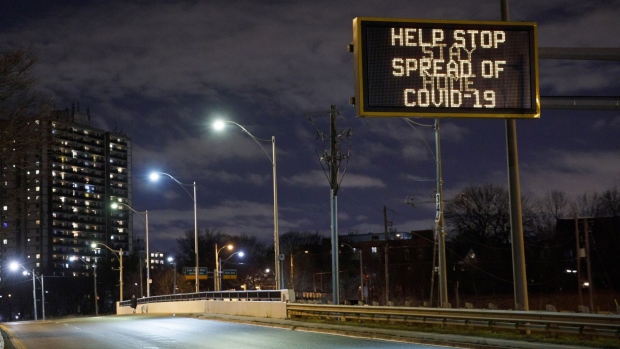 A highway sign encouraging people to stay home in Toronto, Ontario, Canada, on Monday, Nov. 23, 2020. Canada's largest province ordered a lockdown in Toronto and one of its suburbs, a declaration that forces shopping malls, restaurants and other businesses to close their doors to slow a second wave of coronavirus cases. , Bloomberg

(Bloomberg) -- Ontario entered a state of emergency this week for the third time since the pandemic began. For some businesses, it’s a body blow that comes just weeks after they reopened from a previous lockdown order. For others, it extends the prolonged financial pain.

Under the new rules, which went into effect April 8, non-essential stores in Canada’s largest province must close their doors, serving customers only through delivery or outdoor pickup. Personal services such as hair and nail salons are shut, though certain categories -- such as optical stores that sell prescription glasses -- may take clients by appointment.

BNN Bloomberg Television interviewed retail business owners about how they were handling it. Here’s what three of them had to say.

Indigo Books & Music Inc., the biggest Canadian-owned bookstore chain, is feeling the pain like most smaller businesses. Heather Reisman did not hesitate to express her frustration.

“We are destroying a whole segment of the economy. We have been labeled as the ‘non-essentials’ of the economy. And for the first time in my personal life, that’s exactly how I feel. That we are throwaway companies. If we all disappear, nobody cares. That is how our entire sector is being treated -- as if we are disposable. And of course, that isn’t true.”

Sam Care’s independent toy store in Toronto has been open for 18 years and didn’t do online sales until the virus forced her to last year. Her store was closed for about six months in 2020, including right before Christmas; she had to lay off all of her staff and work by herself for the first seven months of the pandemic.

Care opened her website to e-commerce with the help of Shopify -- she calls it “a lifeline” -- which helped boost sales in the fourth quarter.

This week’s lockdown measure seemed more fair because it also affects big-box stores such as Walmart, which will be allowed to sell only necessities such as food and pharmacy items, she said. “I was really happy when they announced that big businesses will be closed as well and only open for essentials. It will make a big difference for small businesses that are online,” she said.

“It’s been an interesting 13 months,” said Care. How long can she hold on to her business? “We’ll have to see, month by month.”

Kristen Gale started a franchise that has 38 beauty bar locations in the U.S. and Canada, about two-thirds of which are in Ontario. Many of them have been shut for more than 200 days since the pandemic began.

“For us the real problem is the fairness thing for the beauty industry,” Gale said in the interview. “We are one of the safest sectors. What’s frustrating is that we’re actually governed by public health. We have health and safety measures for curbing communicable disease spread already built into our operations that we’ve been abiding by for years. So we’re put in the wrong grouping, where we’re first to shut down and last to open.”

The toll has been “tremendous,” Gale said. “A lot of our franchise owners are in a really bad position and basically hanging on by a thread. Unfortunately, many of those locations don’t qualify for any government relief because they didn’t have enough earnings from the previous year in order to show losses.”

One bright spot for The Ten Spot: the pandemic has made it easier to find real estate for expansion, which Gale is still going ahead with despite the pandemic. “We have 12 locations still slated to be open for this quarter. So our growth, thankfully, has not slowed down during this time frame.”