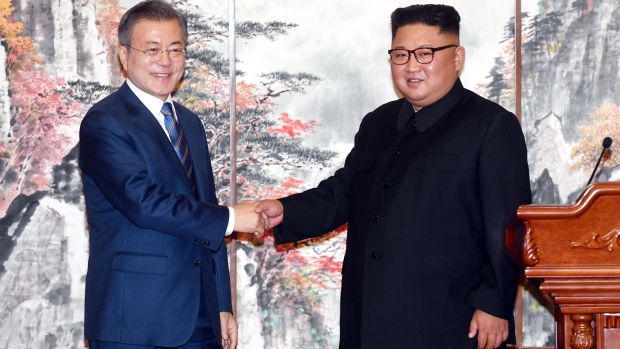 Kim Jong Un looks like he did just enough on Wednesday to get stalled talks with U.S. President Donald Trump back on track, without coming close to giving up North Korea’s nuclear weapons.

During a second day of meetings with Moon Jae-in, the first South Korean leader to visit Pyongyang in 11 years, Kim agreed to dismantle a key missile test site under the watch of international inspectors. He also said he would shutter North Korea’s main Yongbyon nuclear production site if the U.S. takes reciprocal actions -- though it wasn’t clear what steps he was looking for.

Kim has a track record of attaching strings to his concessions that the West has found unacceptable, and this could be another of those stalling tactics.

The question now is whether that’s enough for Trump to agree to a peace declaration that Kim has pushed for before taking concrete steps toward getting rid of his nuclear capability. The Trump administration has sought concessions like a detailed inventory of North Korea’s weapons and inspections, as any peace declaration will bolster arguments for easing sanctions and scaling back the U.S. military presence in South Korea.

Trump praised Kim’s moves, as well as a plan for both Koreas to jointly host the 2032 Summer Olympics, calling them “Very exciting!” in a late-night tweet. Just last month, Trump canceled Secretary of State Michael Pompeo’s planned trip to Pyongyang due to a lack of progress after a landmark summit with Kim in June.

“The ball now is in President Trump’s court about whether he will agree to joint political declaration on the end of Korean War in order to move the stalled denuclearization process along,” said Daryl Kimball, executive director of the Washington-based Arms Control Association. The summit with Moon, he said, suggested “that North Korea is going to take additional steps if there is progress.”

In Pyongyang, both leaders hailed their latest agreement as groundbreaking in emotional statements. They agreed on a range of measures to boost Korean relations, including connecting railways, reuniting families, preparing to restart economic projects and withdrawing guard posts from their heavily militarized border.

Kim said they would make “active efforts to turn the Korean peninsula into the land of peace without nuclear weapons or nuclear threats,” said Moon, who invited the North Korean leader to visit Seoul later this year. “Chairman Kim has clearly shown a way to denuclearize the Korean peninsula today.”

Still, many questions remain. It’s unclear if North Korea will unveil nuclear production facilities other than Yongbyon, and disclose the location of its mobile launchers that can fire intercontinental ballistic missiles that can reach the American homeland.

“Shuttering a missile launch facility or a nuclear facility is different from an overall comprehensive plan to account for, and then verify, roll back and eventually dismantle an entire nuclear weapons program,” said Alexandra Bell, senior policy director at the Washington-based Center for Arms Control and Non-Proliferation.

North Korea has repeatedly slammed the U.S. for failing to uphold its end of the Singapore agreement, which many analysts criticized for failing to specify a timeframe for Kim to give up his nuclear weapons. As Moon arrived in Pyongyang, North Korea’s official Korean Central News Agency cited a commentary that accused Washington of making “gangster-like” demands and failing to build confidence with measures like a peace declaration.

Despite positive steps on Wednesday, both sides have a long way to go ahead of Trump’s goal for the complete, verifiable, irreversible denuclearization of the Korean Peninsula, according to Melissa Hanham, a senior research associate at the James Martin Center for Nonproliferation Studies in Monterey, California.

“North Korea has been clear that they will not give up their nuclear weapons,” she said. “Nothing has changed in this joint statement.”