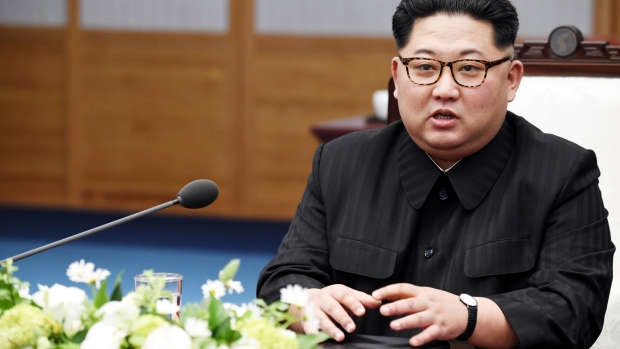 Kim Jong Un, North Korea's leader, attends the inter-Korean summit at the Peace House in the village of Panmunjom in the Demilitarized Zone (DMZ) in Paju, South Korea, on Friday, April 27, 2018. , Bloomberg

While Kim affirmed his willingness to meet Trump again, his nationally televised speech offered no new initiatives to advance talks that have sputtered since their first summit in June. Instead, Kim said his patience with the U.S.-led sanctions regime designed as punishment for his nuclear weapons program was running out.

“I am willing to sit with the U.S. president any time in the future and will strive to produce outcomes that would be welcomed by the international community,” Kim said, wearing a suit and tie and seated in a plush leather chair overlooked by paintings of his father and grandfather at work.

“However, if the United States does not deliver its promise and misjudge our people’s patience, making unilateral demands to continue sanctions and put pressure on us, we will have no choice but to seek a new path to protect the country’s independence, interests and peace on the Korean Peninsula,” Kim said.

In a tweet on Tuesday evening, Trump welcomed Kim’s comments about a potential meeting and halting nuclear weapons tests.

“Kim Jong Un says North Korea will not make or test nuclear weapons, or give them to others - & he is ready to meet President Trump anytime.” PBS News Hour. I also look forward to meeting with Chairman Kim who realizes so well that North Korea possesses great economic potential!

In his speech, Kim also signaled that any deal might require weakening the U.S.-South Korean alliance, urging Seoul not to resume military exercises with the American side. And he made clear that he believed his agreement to “work toward complete denuclearization of the Korean Peninsula” included “strategic assets,” such as America’s nuclear-capable planes and warships.

Kim’s ability to carry out his threats appeared limited if Trump maintains his hard line. The U.S. can defend the sanctions regime through its veto on the United Nations Security Council and its influence over South Korea.

If Kim walked away from talks and resumed weapons tests, he would risk undercutting Trump’s assertion that North Korea is no longer a nuclear threat. The American side would have an easier time reorganizing the sanctions, since China and Russia have based their arguments for easing penalties on the suspension of such tests.

Thus, the speech reaffirmed the negotiating lines since Trump and Kim’s unprecedented summit in Singapore, with the two sides clashing over the pace and sequence of disarmament steps and sanctions relief. The U.S. president has nonetheless pressed for a second meeting with Kim early this year, tweeting after an Oval Office briefing on Dec. 24 that progress was being made.

“North Korea has again restated its position, which remains unchanged,” said Go Myong-hyun, a research fellow at the Asan Institute for Policy Studies. “The prospect of the second U.S.-DPRK summit taking place soon is not any better than yesterday,” Go said, referring to North Korea’s formal name.

The speech showed Kim’s continued focus on direct diplomacy with Trump, who has complained about the cost of maintaining U.S. military support for South Korea. Kim’s representatives have passed up a series of opportunities to start working-level talks with their American counterparts in recent weeks, including a Seoul visit last month by nuclear envoy Stephen Biegun.

Meanwhile, the North Korean leader sent a personal letter to Trump ahead of the holiday, according to two people familiar with the matter who asked not to be identified. The content of the correspondence, which was reported Monday by the Seoul-based Chosun newspaper, was unclear.

Kim’s remarks also appeared intended to appeal to neighbors such as China and South Korea, who the U.S. needs to help maintain sanctions pressure. Kim touted his meetings with South Korean President Moon Jae-in and China’s Xi Jinping in his speech, expressing a desire to expand ties in 2019.

South Korea praised the speech, noting it was the first time Kim had uttered the term “complete denuclearization” in public. “Chairman Kim’s strong determination will be positive for smoothly resolving the Korean issue in the new year,” Moon spokesman Kim Eui-keum said.

Kim emphasized “self-reliance” in his speech as he outlined his efforts to develop his impoverished nation. Still, he made a rare acknowledgment of the problems facing his regime, including a lack of adequate power.

He proposed more “cooperation with socialist countries” and restarting stalled projects with South Korea, something Moon has also sought to reward North Korea’s diplomatic efforts. Kim specifically offered to resume work at the Gaeseong industrial park on the northern side of the border, where South Korean factories use local labor, and the Mount Geumgang resort in North Korea.

The offers could widen the gap between the U.S. and South Koreans on how strong sanctions should remain.

“To summarize North Korea’s foreign policy strategy this year, it is to pressure the United States, to lead South Korea and to strengthen ties with China and Russia,” said Kim Heungkyu, a professor of political science and diplomacy at Ajou University. “As North Korea’s engagement policy toward South Korea will take a full swing, South Korea’s diplomacy will face a huge test.”