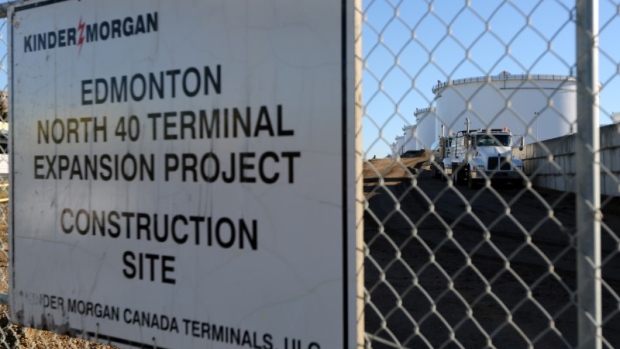 The newly listed shares (KML.TO) dipped to as low as $15.75 before recovering somewhat to $16.33 in late morning trading, down 3.9 per cent from the $17 they were priced at in their initial public offering.

At $1.75 billion, the IPO was one of the largest in the Toronto Stock Exchange's history.

The Houston-based company had originally set a higher target price for the stock in the $19 to $21 range when preliminary plans for the stock offering were first announced.

Since then, the future of the Trans Mountain expansion has been clouded in doubt, with the anti-pipeline Greens and NDP announcing Monday they have come to an agreement that could see the formation of a minority NDP government in B.C.

Both parties have voiced their opposition to the Trans Mountain expansion, which would see the capacity of a pipeline running from Edmonton to Burnaby, B.C., nearly triple to 890,000 barrels of oil per day.

"The decision we took on the Trans Mountain pipeline was based on facts and evidence on what is in the best interests of Canadians and indeed, all of Canada," said Trudeau.

"Regardless of the change in government in British Columbia or anywhere, the facts and evidence do not change."

Alberta Premier Rachel Notley issued a statement saying the provincial government remains "steadfastly committed" to using all means at its disposal to seeing the project through to completion.

The shifting political landscape in B.C. has also raised questions about the future of the Pacific NorthWest LNG project and the Site C dam, both of which NDP Leader John Horgan and Green Leader Andrew Weaver have criticized in the past.

Desjardins Capital Markets analyst Kristopher Zack said in a note that the deal between the Greens and NDP presents another element of uncertainty for Canada's oil and gas landscape.

Zack said the general tone of the two parties is less business-friendly than with the Liberals, though he sees pipelines as under greater threat than shale gas development.

"Our primary concern is the future of the Trans Mountain Expansion, which has been a major flash point in the province and the subject of criticism from both parties," wrote Zack.