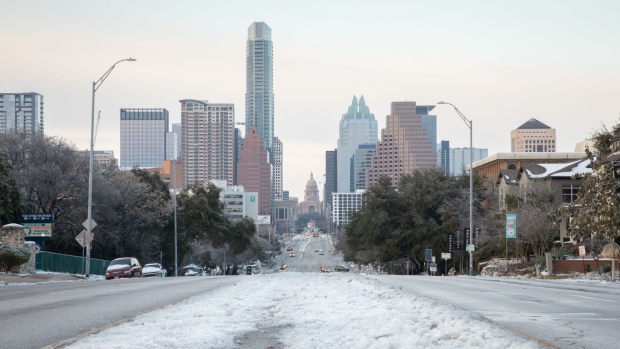 Snow and ice covers South Congress Avenue in Austin, Texas, U.S., on Thursday, Feb. 18, 2021. Texas is restricting the flow of natural gas across state lines in an extraordinary move that some are calling a violation of the U.S. Constitutions commerce clause. , Bloomberg

The second-largest U.S. pipeline operator by market value reported adjusted earnings of $3 billion for last year, up from $2 billion in 2020, the company said in a statement Wednesday. Its fourth-quarter profit of $609 million beat the $569.7 million average of analyst estimates compiled by Bloomberg.

Kinder Morgan, which moves about 40% of U.S. natural gas through more than 70,000 miles of pipelines, was one of the biggest winners from the freeze offs that disrupted gas deliveries in Texas during a deep freeze last winter, pushing prices for the fuel available in storage to unprecedented levels. In contrast, power producers and utilities across the state incurred billions of dollars in losses amid ballooning costs.

Kinder Morgan’s net income may reach $1.09 per share this year, up from 78 cents in 2021, following the $1.2 billion acquisition of Stagecoach Gas Services LLC and the completion of projects, the company said last month. The company plans to spend $1.3 billion in projects and as much as $750 million in opportunities including share buybacks.