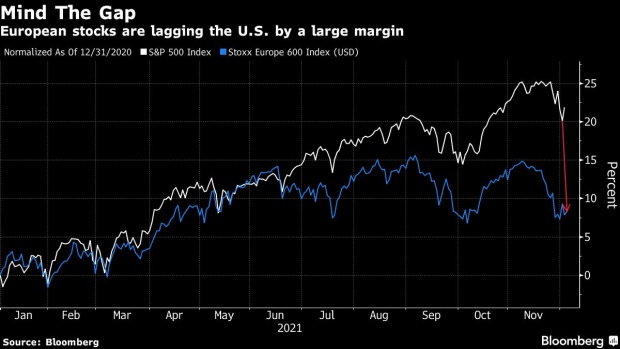 (Bloomberg) -- The dollar’s recent climb to near 17-month highs against the euro is sending stock investors hunting for companies poised to benefit.

The greenback has soared this year and strategist predictions point to more gains to come, with Morgan Stanley calling for the euro to slip to $1.10. That should mean fatter profits for Europe’s biggest exporters and higher stock prices.

The emergence of the omicron coronavirus variant may have deterred some investors away from risk assets, but the thesis that the dollar’s strength bodes well for European companies remains intact. Companies in the pan-European Stoxx 600 Index on average draw more than half of their revenue from outside the region -- and the U.S. is one of their biggest markets.

So now’s the time to pick stocks making most of their money in U.S. dollars, according to some strategists. Strength in the greenback helps European stocks like planemaker Airbus SE, Swiss drugmaker Roche Holding AG, and carmaker Stellantis NV, according to Ben Laidler at eToro Global Markets.

For a company like Airbus, which sells aircraft in dollars and books revenue in euros, a 1 cent fluctuation in euro-dollar exchange rate has an impact of 130 million euros ($147 million) on the company’s annual profits, based on Bloomberg calculations of Airbus earnings.

That may mean premium wine and spirit distributor Remy Cointreau SA and Italian supercar maker Ferrari NV have further to climb. Both stocks have outperformed the Stoxx Europe 600 benchmark this year, rising 32% and 22% respectively.

For Edmund Shing, chief investment officer at BNP Paribas Wealth Management, building-material companies could benefit from rising housing prices in the U.S. “There is a pressing need to rebuild inventories which will help manufacturing demand, construction demand should also stay strong, and rising employment is helping consumption,” he said.

Still, for smaller companies with no exposure to foreign markets, the weak euro is a strong headwind amid a weak European recovery. Analysts caution that the exporter windfall may not be enough to reverse the Stoxx 600’s perennial underperformance against the U.S. stocks benchmark.

“Structurally the problem for European equities is that the return on capital is just lower compared to the U.S. companies,” said Peter Garnry at Saxo Bank A/S. “Europe will continue to underperform the U.S. regardless of the dollar.”