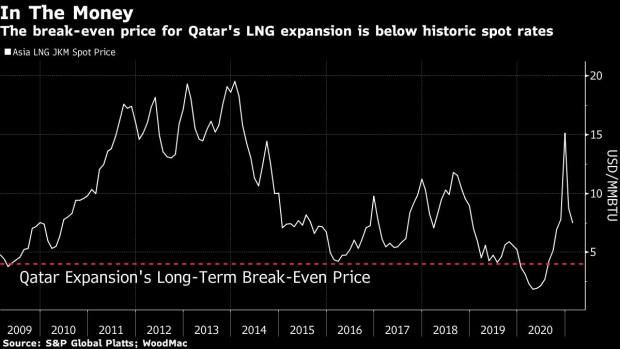 (Bloomberg) -- The world’s top exporter of liquefied natural gas is ramping up production dramatically and undercutting competitors in a bid to squeeze them out of the market.

Qatar is dropping prices and pushing ahead with a $29 billion project to boost its exports of the fuel by more than 50%, stymieing the prospects of new plants elsewhere. It’s also established a trading team to compete in the nascent spot market and pushing into Asia more aggressively, according to people familiar with the matter.

The strategy marks a shift for Qatar, which has barely raised production in the past five years and traditionally prioritized prices over market share. Increased competition, especially from the U.S. and Australia, has forced the Persian Gulf state to become more nimble and attract buyers in Asia, a hot spot for gas demand.

The global transition to renewable energy is adding to the country’s sense of urgency. While LNG was until recently touted as a bridge from coal and oil to the likes of solar and wind power, it’s falling out of favor with some governments as they step up efforts to slow climate change.

“Qatar’s expansion plan is so huge that there are questions on the need for other supply options,” said Julien Hoarau, head of EnergyScan, the analytics unit of the French utility Engie SA. “It’s still the number one, but the U.S. has never been so close, so Qatar needed to move if it wanted to keep its leading position.”

The U.S. came close to overtaking Qatar’s monthly exports for the first time in April due to planned maintenance at the Ras Laffan facility, while Australia has been neck-in-neck with the Middle Eastern nation for the last year, according to ship-tracking data compiled by Bloomberg. As Gulf Coast projects ramp up production, the U.S. is slated to briefly become the world’s top supplier by 2024, before it’s overtaken by Qatar when it launches a massive expansion later this decade, according to data from BloombergNEF.

Several factors are playing into Qatar’s hands. China, one of the fastest growing LNG markets, has been reluctant to import more from the U.S. or Australia due to trade and geopolitical tensions.

But Qatar’s main advantage is that it has the world’s lowest production costs thanks to an abundance of easy-to-extract gas, most of it contained in the giant North Field that extends into Iran.

Qatar’s state energy company, which may soon sell up to $10 billion of bonds to fund the gas expansion, said the project will be viable even with oil at $20 a barrel, 70% less than current levels. LNG contracts are typically linked to oil.

That’s enabling Qatar Petroleum to set pricing below what other exporters can manage, according to traders. The firm has sold LNG in recent months at around 10% of Brent crude prices, including to China and Pakistan, whereas it used to set the level at 15%.

“Nobody can compete with Qatari costs,” said Jonathan Stern, a senior research fellow at the Oxford Institute of Energy Studies. “They can do whatever they like and everybody will have to respond the way they can. And, especially when the market is in surplus and prices are low, that will impact the competition’s profits.”

QP executives have jetted across Asia over the past few months to ink export deals. Their efforts led in March to a 10-year contract with Beijing-based Sinopec, signed at 10%-10.19% of Brent.

Qatar’s Ministry of Energy and QP didn’t respond to requests for comment.

A few years ago, demand for LNG was projected to rise steeply over the coming decades. Gas emits less carbon dioxide than most other fossil fuels when it’s burned, while renewable-energy projects were still too expensive to power electricity grids, factories and transport on a mass scale.

But solar and wind technology is improving faster than expected, helped in part by massive government green-spending programs triggered by the coronavirus pandemic.

Even as Qatar seeks to make the most of its gas assets, there are obstacles to it reaching total domination. Many buyers want a diverse group of suppliers. Russia’s Yamal LNG project and the planned Arctic LNG 2 plant, led by Novatek PJSC, are among those that will remain competitive as Qatar ramps up exports, according to analysts at Citigroup Inc.

“We’re not afraid,” Cheniere’s Chief Commercial Officer Anatol Feygin told investors this month. “We’re part of a sort of diversification of supply and contracting structure along with Qatar Petroleum and our friends at Novatek.”

Yet U.S. projects are among those most likely to struggle. At least 10, five of them in Texas and four in Louisiana, probably won’t secure enough financing to be completed, according to analysis from BloombergNEF.

Feedstock costs are part of the problem. American companies have to buy gas at around $2.50 per million British thermal units, way above Qatar’s wellhead prices of $0.30 or lower.

New suppliers in the U.S. need spot prices to be at least $7.80 per million Btu in Asia and $6.80 in Europe, said David Thomas, an independent adviser and former head of LNG at Vitol, the world’s largest independent oil trader. For comparison, Asian rates have average about $6.80 over the last five years. The economics for producers in Australia and Africa are similar, Thomas said.

“The Qatari strategy appears to be maintaining its global market share and also maximizing sales, before the gas market starts to shrink,” OIES’s Stern said. “It is a competitive and strategic rush. They recognize LNG demand will eventually decline as the world moves forward in the energy transition.”