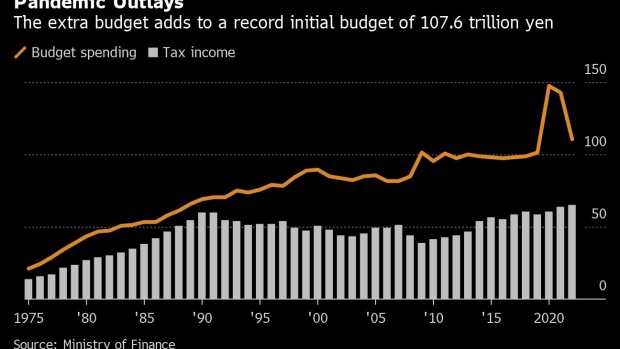 Kofukuji Matsubara shopping street in Yokohama, Japan, on Sunday, April 17, 2022. The Japanese currency has fallen to a 20-year low this month as a dovish Bank of Japan keeps local yields anchored to the floor while their U.S. equivalents surge on expectations for aggressive Federal Reserve rate hikes. , Bloomberg

(Bloomberg) -- Japan’s cabinet approved a 2.7 trillion yen ($21 billion) additional budget to help households and firms hit by higher prices, as the government looked to shore up support ahead of a key summer election.

The budget is part of a package of measures announced by Prime Minister Fumio Kishida last month that aims to ease the impact of inflation, particularly from rising energy costs amplified by the slide in the yen to two-decade lows.

The additional spending comes the day before the government announces growth figures for the first quarter that are expected to show Japan’s recovery stalling. Analysts estimate the economy contracted at an annualized pace of 1.8% as consumer spending was battered by the omicron wave and the renewed activity restrictions that it triggered.

With the measures, Kishida is showing his willingness to act promptly to address rising discontent over soaring energy and food prices while demonstrating his desire to keep the economy on track for recovery.

The spending to address higher prices also gives some breathing space for the Bank of Japan to continue its monetary easing policy despite criticism that the central bank’s divergence from a global wave of policy tightening is contributing to the fall in the yen.

“We’ll seek the passage of this budget in the current parliamentary session,” Finance Minister Shunichi Suzuki told reporters after the cabinet green-lighted the plan. “We’ll make efforts to quickly and appropriately enact the budget policies, while continuing to seek fiscal health.”

The additional spending is another part of record pandemic outlays made by the Japanese government, with Kishida intent on more measures later in the year to keep voters firmly on his side.

Still, the amount of new bonds issued this year won’t change as the finance ministry will use a part of previously issued or planned refinancing bonds for the current cycle of spending.

Japan’s inflation is far below levels in the U.S. and Europe, but economists expect it to have hit a long-targeted 2% level last month. Energy prices are rising at a much faster pace, while producer prices have hit two-digit growth for the first time in four decades, underscoring the pressure Kishida faces to help households and firms.

The additional budget will now be debated in parliament. While it is widely expected to pass, given Kishida’s ruling coalition majority, it is still likely to face criticism that it adds 1.5 trillion yen to a pandemic reserve fund that can be used without close parliamentary scrutiny.

Opposition party members have criticized the government’s use of pandemic reserves for fighting inflation, arguing that the money is being used for purposes unrelated to the Covid-19 crisis.