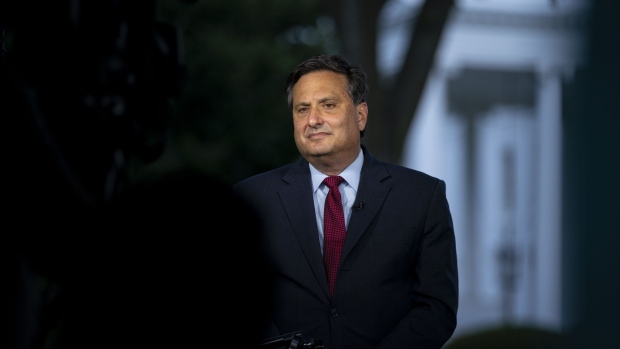 Ron Klain, White House chief of staff, during a television interview on the North Lawn of the White House in Washington, D.C., US, on Monday, Aug. 8, 2022. US President Biden resumed official travel today for the first time since his bout with Covid-19, traveling to Kentucky to show federal support for the state's recovery from historic flooding and to console survivors of the devastation. , Bloomberg

(Bloomberg) -- President Joe Biden’s chief of staff, Ron Klain, said that the White House sees inflation easing but warned against a default on the US national debt, as lawmakers head toward an impasse on raising the borrowing limit.

“We see inflation moderating,” Klain said at the Wall Street Journal’s CEO Council on Monday. “But still a lot of work to do there,” he added.

“I’m not putting the ‘mission accomplished’ banner up here,” he quipped.

Klain also cautioned that lawmakers shouldn’t dither on raising the government’s borrowing limit, a debate expected to come to a head early next year.

Republicans who will control the House starting in January have said they’ll seek to use the debt limit as leverage for priorities including spending limits. Biden has said he will not yield to their demands.

“Failing to raise the debt ceiling isn’t ridiculous, it’s catastrophic,” Klain said. “I believe that no elected official in either party would be irresponsible enough to fritter away the good credit of this country.”

Klain said that in addition to raising the debt ceiling and keeping the government funded, the White House hoped that it could work with the new Republican majority in the House of Representatives on an agenda that included high-skilled job training programs, mental health issues, and education.