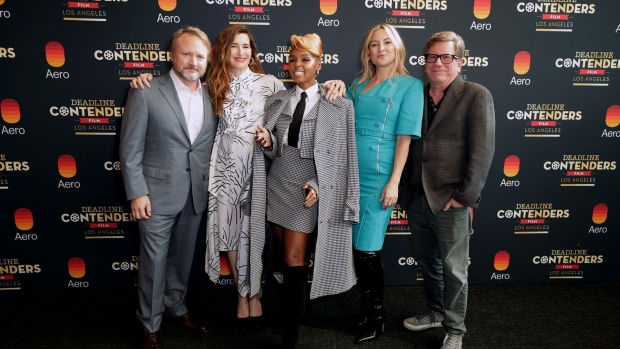 The casts from the film "Glass Onion: A Knives Out Mystery" in Los Angeles. Photographer: Momodu Mansaray/Deadline/Getty Images , Getty Images via Bloomberg

(Bloomberg) -- Glass Onion: A Knives Out Mystery, the first movie from Netflix Inc. to appear in the largest theater chains before it’s available on streaming, brought in $13.3 million over five days in a closely watched limited run.

The total is projected to reach $15 million in the US and Canada when the movie completes its seven-day run this week, according to a person familiar with the matter. The movie played on almost 700 locations, for revenue of about $19,000 per screen, the best average for any film over the weekend, the person said.

The film, a sequel to the 2019 hit Knives Out, played in theaters owned by AMC Entertainment Holdings Inc., Regal Entertainment Corp. and Cinemark Holdings Inc., the biggest US circuits. The companies have resisted working with Netflix because the streaming provider prefers to debut its movies simultaneously or shortly after they appear in cinemas. Once Glass Onion’s theatrical run ends, it won’t be available again until Dec. 23, when it appears on Netflix.

Analyst Eric Handler of MKM Partners, who follows theaters, said Netflix “missed out on an opportunity to make a lot more money” by limiting the film’s run to one week. He called the company’s marketing “subpar.”

Still, he predicted Netflix will offer a few films a year through theaters but said the “marketing support will be minimal.”

AMC Chief Executive Officer Adam Aron tweeted Sunday that he was encouraged by the results, saying they would lead to “more of Netflix down the road.” Boxoffice Pro had projected that Glass Onion would gross as much as $15 million over the five-day weekend that started Nov. 23.

The result was good enough for third place in an otherwise slow weekend for theaters in North America. Walt Disney Co.’s Black Panther: Wakanda Forever was No. 1 with a $64 million haul over five days, while the company’s animated Strange World brought in a disappointing $18.6 million, according to Comscore Inc.

On an Oct. 18 earnings call, Netflix Co-Chief Executive Officer Ted Sarandos played down the significance of the Knives Out theatrical release, calling it “another way to build anticipation for the film and build buzz” ahead of its debut on the streaming service.

Amazon.com Inc.’s plan to spend more than $1 billion a year on movies to be released in theaters could spur companies such as Netflix and Apple Inc. to follow suit, according to Bloomberg Intelligence analyst Geetha Ranganathan.

At the same time, it’s unclear whether the industry will ever return to prepandemic sales given the rise of streaming and a 40% shorter theatrical window, she said.